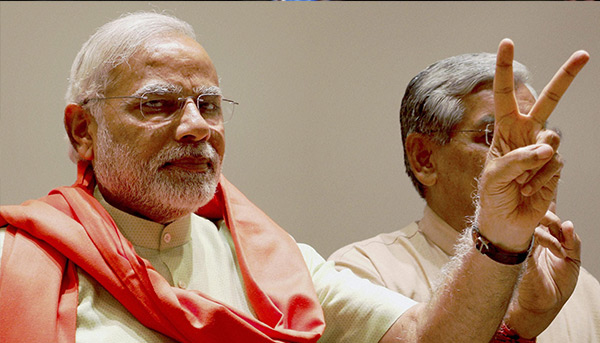 08 November, 2014
Print this article Font size -16+
A hero's welcome awaited Narendra Modi in New Delhi on Saturday (17 May) after he thundered to victory in India's election, trouncing the ruling Nehru-Gandhi dynasty in a seismic political shift that gives his party a mandate for sweeping economic reform.

A brass band struck up early in the morning at the capital's airport as thousands of supporters awaited Modi's arrival from the western state of Gujarat, where the night before he had addressed a sea of jubilant voters chanting his name.

Despite his party's pasting, 81-year-old Singh was magnanimous in his final address to the nation on Saturday, wishing the incoming government success.

"I am confident about the future of India," he said in his televised message. "I firmly believe that the emergence of India as a major powerhouse of the evolving global economy is an idea whose time has come."

Unlike Singh and his predecessors, Modi will not have to deal with unruly partners to implement reform. That could usher in profound economic changes, with some supporters imagining him as India's answer to former British leader Margaret Thatcher.

With more than six times the seats of his closest rival, Modi's is the most decisive mandate for a leader since the 1984 assassination of Congress party prime minister Indira Gandhi propelled her son to office. Starting with the subsequent election in 1989, India has been governed by coalitions.

"Tsunamo!", declared the Asian Age newspaper on its front page, playing on the name 'NaMo' often used for Modi.

"Modi juggernaut crushes Congress," the Business Standard's headline exclaimed after Friday's results showed the party of the Gandhis and Prime Minister Singh suffered its worst-ever wipeout, winning just 44 of the 543 parliamentary seats at stake in the election that was staggered over five weeks.

With almost all seats declared by Saturday morning, Modi's BJP looked set to win 282 seats, 10 more than the majority required to rule. With its allied parties, it was heading for a comfortable tally of around 337.

US Reaches Out
The desire for change among the youthful electorate after a slump in economic growth, years of policy drift and a spate of corruption scandals appears to have overridden concerns about Modi's Hindu-centric politics and a spasm of violence against Muslims that occurred on his watch in Gujarat 12 years ago.

In his victory speech on Friday (16 May), 63-year-old Modi addressed concerns that his pro-Hindu leanings would sideline minorities, declaring that "the age of divisive politics has ended - from today onwards the politics of uniting people will begin".

"No words will be enough to salute the youth of India. They led from the front in the elections & rose above non-issues like caste & creed," Modi wrote on his Twitter page late on Friday.

In Washington, the Obama administration congratulated Modi, and said he would be granted a visa for US travel. Washington denied Modi a visa in 2005 over the sectarian riots three years previously in Gujarat state, where he was chief minister.

"While Modi was regarded by several critics as a 'divisive' force, the landslide vote for him shows ironically as a 'unifying' force," Jagdish Bhagwati, an eminent Indian-born economist who has positioned himself to advise the new prime minister, told Reuters in an email exchange.

Modi is expected to try to replicate his success in attracting investment and building infrastructure in Gujarat, the state he has governed for more than 12 years.

Betting on a Modi win, foreign investors have poured more than $16 billion into Indian stocks and bonds in the past six months and now hold over 22 percent of Mumbai-listed equities - a stake estimated by Morgan Stanley at almost $280 billion.

Tough Tasks Ahead
But with India's economy suffering its worst slowdown since the 1980s and battling high inflation, it will not be an easy task to meet the hopes of millions of Indians who have bought into the idea that Modi will quickly push their country onto the top table of global economic powers.

His party also lacks strength in the upper house of parliament, where backing is needed for legislation to pass.

"It's important to be realistic about how quickly they can instigate change. It takes time to, number one, get economic reforms through the political machinery and, number two, it also takes a while before economic reforms actually have a positive impact," said Leif Eskesen, an economist at HSBC in Singapore.

When Indira Gandhi was prime minister it was often said that she was so dominant that "India is Indira, Indira is India". The Economic Times echoed that on Saturday, with a headline: "India is Modi. Modi is India."

"Modi's ability to rise from nothing to everything has demonstrated that Indians are no longer willing to accept credentials such as belonging to a dynasty or assertion of past scholarly accomplishment abroad as a substitute for persuasive argumentation: you have to perform to command respect," said Bhagwati.