New Delhi [India], Aug 15 (ANI): Jharkhand Chief Minister Hemant Soren has urged the Board of Control for Cricket in India (BCCI) to host a farewell match for former skipper Mahendra Singh Dhoni, who announced his retirement from international cricket on Saturday.
Dhoni, who was born and brought in Ranchi, has played domestic cricket for the state (then in Bihar). He had represented Bihar, East Zone and Jharkhand in the domestic circuit.
The 39-year-old played 131 first-class matches and scored 7038 runs at an average of 36.84. The Chief Minister wants to host a farewell match for the wicketkeeper-batsman in Jharkhand.
"Mahi, who has given many moments of pride and enthusiasm to the country and Jharkhand, has retired from international cricket today. We will not be able to see everyone's favourite Jharkhand-born cricketer in the Blue jersey. But the heart of the countrymen is not full yet," Soren tweeted.
"I wish Mahi get a farewell match in Ranchi which will be seen across the globe. I urge BCCI to give Mahi a farewell match which will be hosted by Jharkhand," he added. 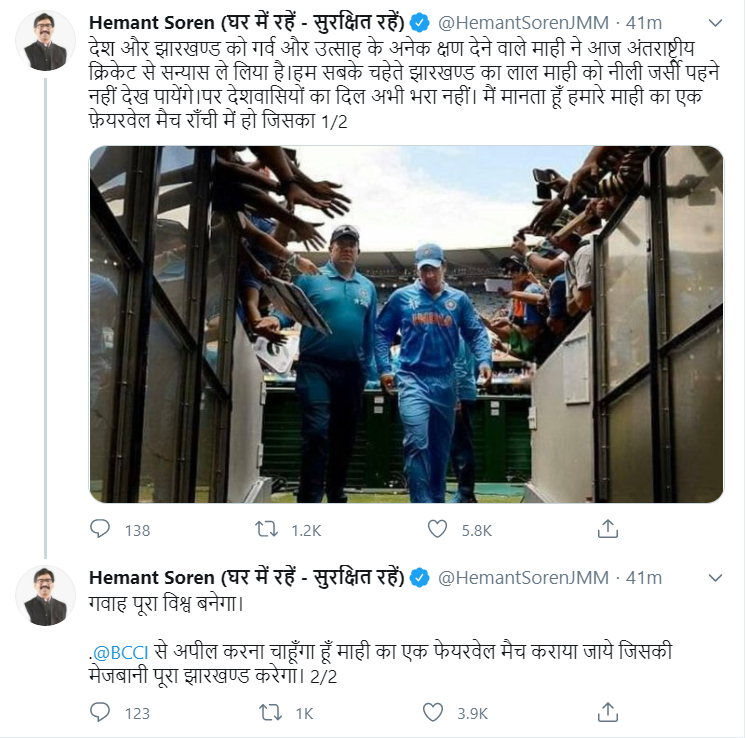 Dhoni made his ODI debut in 2004 and since then changed the face of Indian cricket with his calm demeanour, sharp understanding of the game, and astute leadership qualities.
He is among the most successful captains in world cricket. It was under his leadership that India lifted the ICC Cricket World Cup in 2011 after having led India to triumph in the ICC World T20 in its maiden edition of the tournament held in 2007 in South Africa.
With India winning the ICC Champions Trophy in 2013 in England, Dhoni became the first and is still the only captain to date to have won all three ICC Trophies.
While his heroics in the limited-overs formats are well documented, it was also under his leadership that India became the number one Test side in 2009 and the team stayed at the top for over 600 days.
He has led India to victory in 21 home Test matches, the most by an Indian captain. Leaving behind a rich legacy that will be difficult to replicate, Dhoni holds the record for most international matches as captain (332).
Unarguably the quickest man behind the wicket, Dhoni has 195 international stumpings, the most by any wicket-keeper.
Dhoni had played 350 ODIs and scored 10,773 runs with the highest score of 183* against Sri Lanka. In 98 T20Is, he amassed 1617 runs at an average of 37.60.
Also referred to as 'Captain Cool', Dhoni is known for his calmness and exquisite captaincy on the field.
He was also known for his knack of opting for reviews and many have jokingly remarked to change the 'Decision-Review System's' name to 'Dhoni-Review System'. In December 2014, he announced his retirement from Test cricket and gave a chance to the likes of Wriddhiman Saha.
Dhoni called time on his Test career after playing 90 Tests, managing to score 4,876 runs at an average of 38.09. Then in 2017, he handed over the captaincy to Virat Kohli in the 50-over format.
Dhoni was slated to return to the cricket field on March 29 during the IPL's opening match between CSK and Mumbai Indians.
However, the tournament will now be played in the UAE from September 19 to November 10. He will continue as CSK's captain in the IPL 2020. (ANI)