Helping Modi Get His Priorities Right 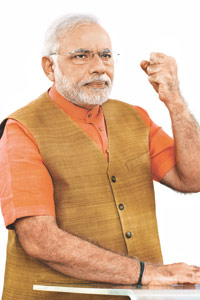 08 November, 2014
Print this article Font size -16+
At least two days before the counting of votes On May 16 — and, in fact, even before the exit poll predictions trickled in on May 11 — the stock market had begun anticipating a huge victory for Narendra Modi and the BJP. Between 7 May 2014 and 15 May 2014, the BSE Sensex rose from 22300 to 23900, while the Nifty shot up from 6652 to 7123 (both have gone up further since the results were announced). Reports suggest that foreign institutional investors (FIIs) pumped almost Rs 1 lakh crore into the Indian debt and equity markets since the time Modi was named the prime ministerial candidate for BJP. After it became apparent that Modi was headed for a landslide victory, the rupee also strengthened dramatically, moving from Rs 60-plus to a dollar to Rs 58 to a dollar currently.

The euphoria in the markets was on account of investors and corporations expecting Modi to quickly fix all that went wrong in the past five years of the UPA II government. And because everyone expects Modi’s government to be the antithesis of the Manmohan Singh-led government. Where Manmohan Singh dithered, people are banking on Modi’s reputation for decisive action. Where the UPA II government found it hard to get any Bills passed in Parliament, the expectation is that the BJP-led NDA, with 336 seats, will have no problem with critical Bills, in the Lok Sabha at least.

Those are huge expectations, and in all the celebrations of Modi’s tremendous victory, a lot of people are overlooking the extent of the problems Modi is inheriting from the UPA. The new Prime Minister will need to really work hard to undo the damage of the past five years — and need a lot of luck as well.

Take a look at the numbers in the graphic, and you will see the sheer number of issues Modi is expected to fix. GDP growth over the past couple of years has been below 5 per cent. Before the election results came in, the World Bank and several others had predicted another sub-5 per cent GDP growth year.
Meanwhile, the Index of Industrial Production (IIP) numbers of the past couple of years show that manufacturing has been stagnant — and, in fact, dipped occasionally. In 15 of the past 24 months, the IIP has been either flat or negative. Job creation has slowed to a crawl and the number of unemployed in the country has risen sharply. The fiscal deficit is at an alarming 4.6 per cent of GDP. The fiscal deficit started ballooning when Pranab Mukherjee was the finance minister, and his successor P. Chidambaram has not, despite his best efforts, managed to reduce it very significantly.

Infrastructure development has been moving at a snail’s pace and power plants are suffering from a huge fuel problem. Coal production has been flat for the past couple of years with the result that India is importing huge amounts of coal for its power (and steel) plants despite having the fifth largest reserves of coal in the world. And because of the falling gas production from the KG Basin, almost 5,000 MW of power capacity of gas-based plants is currently
lying idle.

Then, there is the inflation bugbear that the RBI has valiantly tried to tame through monetary policy — raising interest rates regularly. Both current RBI governor Raghuram Rajan and his predecessor D. Subbarao have used interest rate hikes to combat inflation — in the process drawing flak for dampening growth. The monetary policy has had some effect on WPI — which has come down over the past two years. Currently, the WPI is just over 5 per cent, a far cry from the 7.5 per cent-plus it was at in November 2013. But the other big inflation problem — food price inflation — has fluctuated between 11 per cent and 8 per cent over the past 18 months despite all efforts.

The issue with food price inflation is that it is not something that monetary policy can tackle — it is something that will respond better to fiscal measures and other government policies.

There are plenty of other problems as well — ranging from rising non-performing asset levels in the banking system, a huge subsidy burden, a slew of pending legislations to the tax disputes with a host of multinationals — that the Modi government will have to sort out. There is also the problem of corporate debt, which has doubled in the past five years. Apart from the economic problems, of course, there are problems in Home, Defence and External Affairs that require urgent attention.

Obviously, Modi cannot tackle all the problems at the same time. So what should he prioritise? BW | Businessworld reached out to a host of economists, thought leaders and industrialists to seek their views on the most critical problems the Modi government should take up. We left out Defence and External Affairs and stuck to the bread and butter economy issues — infrastructure, inflation, financial reforms, taxation, manufacturing growth and job creation.