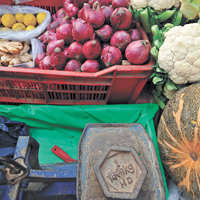 Poised On A Knife-edge
For the RBI, the January policy review could well be a difficult one, as it balances the options of maintaining the growth momentum against the imperative of bringing inflation down quickly. To this end, even the government would look to the RBI for solutions. With elections in five states scheduled for this year, the UPA government is hard-pressed for solutions.

Bank credit growth — which is a good proxy for economic activity — has been below target for much of the year, because interest rates have been high. Firms have relied on overseas and suppliers' credit — both cheaper alternatives — to meet working capital demands. As the global economy, particularly the US, improves, those lines of finance may not be as easy to come by.

But what the RBI says and does will matter the most. The central bank has its own surveys and other analytical tools to assess the state of the economy. "If the RBI believes that the growth prospects are good, then higher interest rates will have little effect on credit demand or investment," says Pan.

Central Bank of India's Sridhar believes that there is enough slack in consumption. "Tier-II and tier-III cities are the drivers of growth," he says. "There are lots of substitution effects, as people buy more expensive branded products."

Just before BW went to press, the inflation data came out: the food price index went up nearly 17 per cent. And the fuel price index for 1 January 2011 rose over 11.5 per cent compared to the previous week. As feared, it was bad news, and will impact the RBI's thinking on its interest rate policy. Hold your breath.