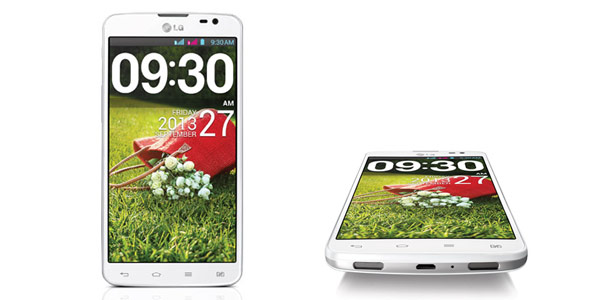 08 November, 2014
Print this article Font size -16+
LG is being a little modest by calling this 5.5-inch smartphone “Lite”. True, it has a Mediatek MT6577 processor, a 540 x 960 pixel display with just 200 ppi density and just 1GB of RAM, but the G Pro Lite is otherwise so packed with capabilities and features, that it’s definitely another great option for those who want a mid-level phone without being left envying the top-enders.

The G Pro Lite is not in any way a new design – it has the same familiar look and feel and could be any phone at all, from the outside – but if you’ve been hunting for a budget phone, (it costs Rs 22,990 but is available for less), give this device a good look. It’s about the size of a Galaxy Note and quite comfortable to hold. Rounded edges help there. Look closer and you’ll see two things that are different on the G Pro Lite. First, there’s an extra capacitive button on the bottom row. Tap it and you can switch between two SIM cards, one of which supports 3G. While we’re on the subject of taps, you tap twice on the screen to wake the screen up and again to make it go to sleep – an incredibly useful feature. On this phone, it chooses to sometimes not work, even if you tap quite firmly, and you can bet this will happen when you’re trying to show it off. But when the knock-knock feature does work, it beats pressing a button to start up. The phone runs on Android 4.1, a few steps behind, but nevertheless works fast. It’s got all of LG’s favourite software, including the multitasking apps.

The display on the G Pro Lite isn’t high on specs but is very workable with strong colours and uncompromised angles. It’s smooth and responsive, as is the rest of the phone. It’ll handle mid-range gaming, for example. And it has a hefty huge battery with a 3,142 mAh rating. There’s also expandable memory. The 8MP camera is middling and just fine for everyday casual shots.

But I did mention two things that were different and visible and the second is a surprise thin stylus fitted into a slot on the top of the device. It doesn’t work in the same way as Samsung’s Note does, but it works.