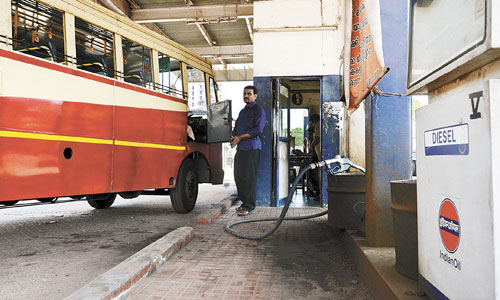 08 November, 2014
Print this article Font size -16+
The chairman of Indian Oil (IOC), R.S. Butola, is all smiles these days. He is a much relieved man after the government raised bulk diesel prices by Rs 9.25 a litre last week, removing the entire subsidy on the fuel that drives India. The government also increased retail diesel prices by 45 paise a litre and provided state-owned oil marketing companies (OMCs) the freedom to hike prices by similar small amounts every month till the subsidy goes. Says Butola: “This move provides us the flexibility to fix diesel prices, and will help reduce under-recoveries.”

As the biggest supplier of diesel, IOC has the most to gain. Thanks to the increase, under-recoveries — both bulk and retail — shall come down by approximately Rs 3,400 crore this fiscal year for all OMCs — and an estimated Rs 15,000 crore next fiscal. This is the second time in four months that diesel prices have been raised. In mid-September 2012, diesel prices were increased by Rs 5 per litre. While the government is taking baby steps on the retail front to cushion the impact for consumers, for bulk users it is a body blow. “Allowing bulk diesel sales at market prices is an astonishing development. It is a transformation for the Indian fuel industry,” says Deepak Mahurkar, leader, oil & gas industry practice at PricewaterhouseCoopers.

However, officials at boardrooms across industries are frowning because now they need to redraw plans. Bulk diesel sales are largely to the defence sector, the railways and state transport corporations. The 11.5 million tonnes (mt) of diesel sales to bulk users accounted for 17.8 per cent of India’s total sales of 64.7 mt during 2011-12. Other big users are telecom tower companies and cement companies. This is where the impact of higher diesel prices will be reflected soon.

At 2.4 mt annually, Indian Railways is by far the biggest consumer of bulk diesel. The removal of subsidy on bulk diesel has upset all calculations. According to a Railway Board official who does not want to be identified, increased diesel prices will mean an additional burden of Rs 2,500 crore this fiscal alone. That is more than double the Rs 1,200 crore Indian Railways expects to earn from the recent passenger fare hike in this financial year.

The railways do not have many options. One proposal doing the rounds of the railway ministry is to peg the base fare that reflects the costs incurred by the railways. It could add a fuel surcharge on top of that, similar to what airlines do. The other proposal is to ask for increased budgetary support to factor in increased diesel prices.

The state road transport corporations use 2.2 mt of bulk diesel annually. Various state governments are looking at plans to stem the deficit. Says A. Mohammed, minister for power and transport, Kerala: “The state cabinet has had discussions and written letters to the central government and the concerned ministries to withdraw the hike. We will decide on the future course of action once we hear from the Centre.”

Meanwhile, Andhra Pradesh Road Transport Corporation (APSRTC), India’s largest state transport corporation with 19,000 buses, will incur a burden of Rs 715 crore in the next fiscal on account of the increased price. It is looking at a combination of measures including sourcing of fuel from private dealers and possibly reducing services on certain loss-making routes. “This hike has come at an inopportune time for us. While we have a huge impact, private operators have to pay just 50 paise more. We need to ensure that traffic does not shift to private bus operators”, says A.K. Khan, vice-chairman and managing director of APSRTC.

One way out, though difficult, is to hike bus fares. Says A.K. Prabhakar, senior vice-president, equity research at Anand Rathi: “The choices before state transport corporations are very limited. With elections round the corner, states would not like to hike tariffs. At best, there could be some marginal increase in fares.”
The other big consumer is the defence sector, which consumes 0.267 mt of diesel annually. Prabhakar goes on to add that the biggest impact of increased prices will be on cement plants and telecom tower companies.

Private users, including telecom tower and cement companies, consume a little over 6 mt of  diesel. Telecom tower companies are the newest buyers of bulk diesel. During 2011-12, tower companies consumed 2 billion litres (1.7 mt). “Grid connectivity is the job of power distribution companies. We are forced to use diesel since there is no grid-based power for over 12 hours a day in many areas. The increase in costs will be passed on to the consumer,” says Umang Das, director general of Tower and Infrastructure Providers Association (Taipa). He goes on to add that the government should include infrastructure users as a separate category of diesel users.

While the government has removed the subsidy on bulk diesel sales, can the government sustain the monthly hike in retail diesel prices? That could prove to be a challenge. Even if oil companies are able to raise diesel prices by Rs 3-4 per litre during the current year, it would substantially bring down subsidy losses.

While the increase in diesel prices would effectively reduce under-recoveries of OMCs, it could end up being a double-edged sword. All along, state-owned oil marketing companies offered diesel at cheaper prices since the Centre reimbursed their subsidy burden. With the subsidy going, private oil companies will be in a position to match the OMCs. Says Mahurkar: “The entire process of diesel procurement will change as oil companies cannot take customers for granted.”

The level of competition in the sector is expected to rise dramatically. Says a petroleum ministry official: “Private oil companies can offer to sell diesel at a slightly lower price and bag large supply contracts.” That could be a big threat to OMCs in the longer term. However, OMCs are not worried, as of now. Says Butola: “We are already competing with private oil companies in aviation turbine fuel. This will be one more product added to the list as far as competition goes.”

These are still early days for the decontrolled diesel economy. With elections in 10 states due this year, the political class could roll-back the increase for short-term political gains. If the government does manage to ride this wave, then a total decontrol of petroleum pricing should not be too far away.