Cape Town [South Africa], July 15 (ANI): Former South Africa batsman Hashim Amla on Wednesday came out in support of the 'Black Lives Matter' movement and also thanked pacer Lungi Ngidi for taking a stand for the right cause.
Amla also said that some people are really delusional as they believe one race is superior to the other.
"The imagined superiority of whites over blacks or blacks over whites, or one nationality over another, is simply delusional. Yes, that's right, nothing but delusional," Amla wrote on Instagram.
"However many of us, including myself, have borne the brunt of these delusions and have crazy stories to tell which is why it makes it even more admirable to see exceptional youngsters like @lungingidi doing his bit to represent us all. Thank you brother and all those who stand up for just causes in their own way - publicly and privately," he added. 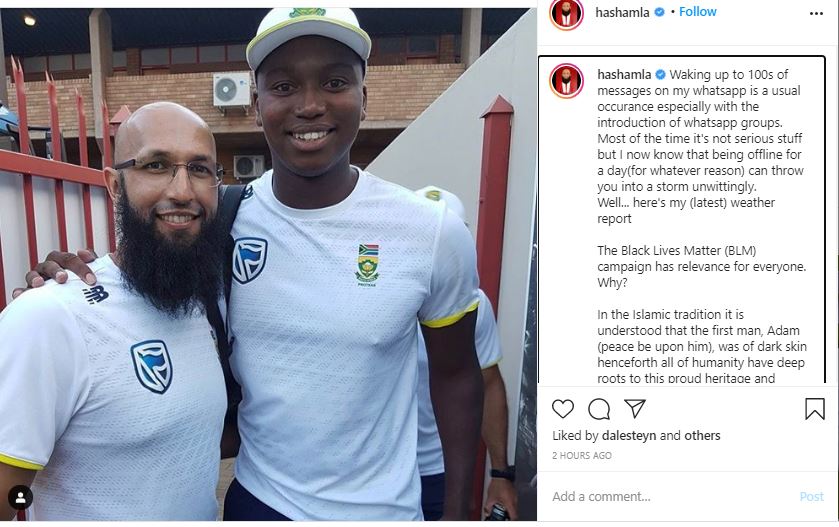 Amla's post comes just one day later as thirty-one former and current domestic and international South African players, including Makhaya Ntini, Vernon Philander, JP Duminy, and Herschelle Gibbs signed a letter in support of Lungi Ngidi and the Black Lives Matter movement.
The letter was also signed by five current coaches including national fielding coach Justin Ontong, ESPNCricinfo had reported.
As per a report in ESPNCricinfo, the letter is a collective effort aimed at showing solidarity with the anti-racism campaigns across the world. The letter has also urged Cricket South Africa (CSA) and the white cricketers to show their support towards the Black Lives Matter movement.
"We commend Lungi Ngidi for supporting #BlackLivesMatter and we would like to add our support for it too," the letter by the former and current Proteas cricketers stated.
"We note the criticism aimed at Lungi for expressing his views -- and we hope that CSA, together with fellow cricketers both present and past will come out strongly in support of #BLM," it said.
Earlier, Lungi Ngidi had urged the CSA board to show their solidarity for the Black Lives Matter movement and this came under criticism from former players such as Pat Symcox, Boeta Dippenaar, Rudi Steyn and Brian McMillan.
"We note too that the most outspoken criticism directed at Ngidi has come via former players such as Pat Symcox, Boeta Dippenaar, Rudi Steyn, Brian McMillan, and others. We urge that their views be challenged. We are not surprised at their comments," players showing support towards Lungi Ngidi said in their letter.
"Given South Africa's well-known past, black cricketers have borne the brunt of subtle and overt racist behaviour for many years, including from some colleagues. Consequently, there is a need to understand how white privilege feeds into the perpetuation of these old attitudes and assumptions," it added.
The Black Lives Matter movement gained momentum following the death of an African-American man named George Floyd, after a police officer, later identified as Derek Chauvin, pressed his knee on Floyd's neck in a viral video.
During the first Test between England and West Indies last week, players from both sides had taken a knee to show their solidarity against racism. (ANI)