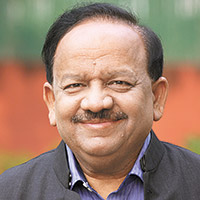 08 November, 2014
Print this article Font size -16+
If union health minister Harsh Vardhan is to be believed, the government is thinking of giving 50 essential drugs free of cost to 1.2 billion Indians from ‘birth to death’. To be initially rolled out at select hospitals across India, the programme will focus on efficient procurement, quality control and rational use.  We know where this is coming from. As Delhi state’s health minister during 1993-98, Vardhan had pioneered the ‘public drug distribution’ model which helped people access subsidised quality drugs through an efficient procurement and distribution system. That model was later adopted by the WHO and implemented by a dozen other Indian states. But the latest proposal veers towards populist zeal and fiscal recklessness. Consider this: the Indian pharmaceuticals market is worth over Rs 75,000 crore at present and basic essential medicines account for 40-50 per cent of this market. Free drugs to all will mean a tab of Rs 30,000-37,500 crore every year. A more sustainable approach will be procurement and distribution of essential drugs at affordable prices through public hospitals.
— P.B. Jayakumar

Sense & Sensibility
the recent rail fare hike was supposed to be the first of the tough measures to put the country’s finances back on track. But within days, the hike in suburban services was rolled back. After all, Maharashtra goes to the polls soon, and the Mumbai commuter was badly hit by the nearly 100 per cent hike in monthly fares. While that may be a politically sound decision, it’s time the suburban railway networks in the country are spun off — Mumbai, Chennai and Kolkata — into separate entities. This will allow each unit to focus on the city it is operating in and also allow planners to invest and improve networks. By removing the subsidy on them, the networks can be modernised to meet global speed and safety norms.
— Anup Jayaram

It’s Wish-ful Thinking
it’s budget season once again, and we are all collectively coveting a tax-break from the government. Who doesn’t want lesser taxes, after all? But one question that merits discussion is the possibility of deductions for expenses incurred by individuals, similar to those allowed to corporates. Currently, corporates pay a tax on the profits they make after deducting expenses. On the other hand, salaried people get a minimum exemption, but get taxed on their total revenues. Such deductions will compensate for the lack of social security in our country. At a time when inflation is eating into disposable incomes, allowing deduction of at least some living expenses, or a higher minimum exemption limit, will act as a balm to soothe the salaried class of India.
— Abraham C. Mathews

Win Some, Lose Some
It’s not all doom and gloom for Reliance Industries (RIL), ONGC and Oil India following the government’s decision to defer the gas price hike. The move has its silver linings too. In fact, the inability of the government to arrive at decisions on policies related to the gas sector has discouraged foreign players from exploration and production activities in India. Already, British giant BP Plc, which bought a 30 per cent stake in RIL’s 21 oil and gas blocks for $7 billion in 2011, has been struggling to recover its investments. In such a scenario, global giants are likely to keep off the Indian market in future, giving a free play to the domestic giants.
— Nevin John

Voice Of Reason
HDFC chairman Deepak Parekh wants banks and housing finance companies (HFCs) to be allowed to fund land acquisitions. The logic: at present, finance is sourced from sundry sources at exorbitant interest rates which pushes up the cost of the final product — land cost can be 30-80 per cent of a realty project depending on the location. If formal and cheaper finance (via banks and HFCs) is available at a project’s inception— the land buying stage — it will drastically reduce what you pay to buy a nest. It will also have a huge multiplier effect on the economy: steel, cement, consumer goods, furnishings, malls, entertainment, the works really. But if Parekh’s suggestion is to see the light of the day, the mindset needs to change at Mint Road: it classifies realty, equities and commodities as ‘sensitive’ sectors. It notes that unlike in the past, in 2012-2013, bank loan exposure to ‘sensitive’ sectors doubled largely due to exposure to realty as a result of the steep rise in housing prices in Tier-1 and Tier-2 cities. You can’t miss the irony: realty exposure in a way went up only because we have not done what Parekh wants!
— Raghu Mohan

Setting The Agenda
A group of economic experts, under the banner of the World Hindu Economic Forum (WHEF), has framed an agenda for the new government. It calls for an end to what it thinks is wasteful expenditure and seeks additional taxation and reduction in the reach and role of the government in the economy (perhaps, a euphemism for disinvestment of public assets and reduction in subsidies). The 27-point agenda has one flaw though. Many a times, it stands against the electoral promises of the ruling BJP. The forthcoming Union Budget will perhaps prove whether WHEF’s prescriptions are holier than the so-called nationalist sentiments expressed by the Swadeshi Jagaran Manch or the Rashtriya Swayamsevak Sangh, with both explicitly favouring a less liberalised economic regime.
— Joe C. Mathew

Nothing Black And White About It
The government on June 24 extended the ban on import of milk and milk products from China by another year. The ban was imposed after it was alleged that milk and milk products from China contained melamine, a toxic substance used for making fertilisers and plastic. But here is an irony: India does not import any milk or milk products from China. In fact, it does not import milk at all —it is a milk-surplus country and the world’s largest producer of milk. So what’s the ban all about? Some say it could be a pre-emptive step as the government is wary of taking any risk. Alternatively, there could be a diplomatic angle to it — the ban can come handy as a diplomatic tool if and when the NDA-led government decides to sweeten trading relations between India and China.­
— Sachin Dave

Medieval Mindset
Union health minister Harsh Vardhan’s view on sex education deserves the reaction it has evoked. To call for a ban on ‘so-called sex education’ in schools is outright retrograde. His stress on value education and yoga in the school curriculum, although perfectly fine in its own right, seems to imply the corruptive influence of sex education in schools. He forgets that scrapping the topic from the curriculum will not stop children from accessing information about sex as it is everywhere on the Internet. A 2013 UNPF report says four million girls in India aged 15-19 years give birth every year, which is a matter of concern. The best and easiest way to communicate the ill-effects of the same to children at an early age is only possible through schools. After all, teenage pregnancy or rapes can be better handled by sharing the right information rather than those through multiple sources on the Internet.
— Rozelle Laha

The New Cool
The splits versus windows debate is passé. The new kid on the block that’s fast becoming the coolest one is Variable Refrigerant Flow (VRF) systems using inverter technology. This is a multi-split AC system offering a cheaper and more energy efficient alternative to central airconditioning. According to AC makers, the adoption level is fast rising, not just in offices but in new residential apartments as well. According to LG’s Head of Business for AC Saurabh Baiskhia, VRF technology has a bigger application in homes thanks to the ability to cut off cooling where not required. Also, costs have dropped substantially this year — 30 per cent from last year (it now works out to anywhere between
Rs 45,000-Rs 55,000 per tonne narrowing the gap between the VRF and a single split AC). The total residential AC market in India (split AC and Window AC together) is around Rs 10,000 crore. VRF is an additional Rs 2,000 crore market, and now expected to grow at a fast clip. Energy saving is clearly emerging as the biggest USP in the power guzzling AC segment.
— Chitra Narayanan

Engineering A Change
India’s membership of the Washington Accord augurs well for engineering education in the country as well as its engineers. Besides global recognition for Indian engineering degrees, the membership of this club is likely to eventually ensure global quality for all engineering institutions in the country. But all this will depend on astute gate-keeping by the National Board of Accreditation (NBA). The 220-odd Tier-I engineering institutes shortlisted by it will have to apply afresh for accreditation and get their programmes vetted before they are awarded equivalence with Washington Accord institutions. So expect extensive rejig of courses and changes in emphasis. Also, NBA has asked universities to allow affiliated Tier-II engineering colleges to design 50 per cent of their programmes. These developments, along with the Modi government’s efforts to spur the manufacturing sector, may revive the glory of engineering education, which, in the past few decades, has mostly been used as a stepping stone to an MBA degree.
— Rozelle Laha