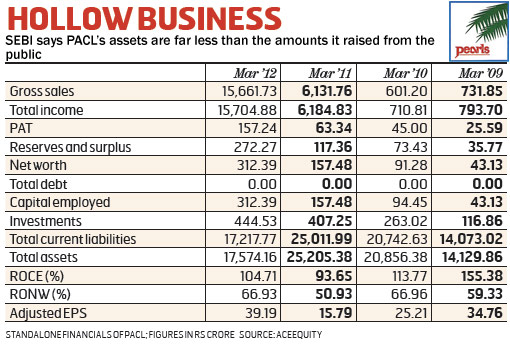 08 November, 2014
Print this article Font size -16+
Capital market regulator SEBI seems to have taken upon itself to prevent unscrupulous corporate entities and fly-by-night operators from defrauding retail investors of their hard-earned money.

Following its victory in the Sahara case, SEBI has now taken up cudgels against Pearl Agrotech Corporation (PACL), which is alleged to have flouted ‘SEBI Collective Investment Schemes’ norms while raising public funds to invest in real estate and agriculture farmlands.

SEBI has now asked PACL to return over Rs 49,000 crore to investors who have participated in their investment scheme since 2005. “The business/activities/schemes/plans offered and operated by PACL are Collective Investment Schemes (CIS). The natural consequences of such findings would be to inter alia direct PACL and its directors and promoters to refund the monies, which have been collected in an unauthorised manner, with promised returns to investors,” said SEBI directive to PACL.

As per PACL’s submission to SEBI, the company has raised public funds worth Rs 49,100 crore to deal in real estate — mostly buying land, holding it for a definite period and then selling it to make decent profits. In its report, PACL has stated that it had agricultural and commercial land assets worth over Rs 11,700 crore. The company claims to have repaid funds to 1.2 crore investors out of the total 4.6 crore. SEBI, however, is not comfortable with these disclosures.
“By its own admission, PACL does not have enough land bank compared to the amount mobilised by it from customers. The outstanding dues to customers as on 31 March 2014 is Rs 29,420.65 crore and the value of total land in the form of ‘stock –in-trade’ as on 31 March 2014 is Rs 11,706.96 crore. PACL does not have assets corresponding to the amounts of monies raised by it from public,” SEBI contended.

Based on these points, SEBI has asked PACL to return the money collected from investors (with promised returns) within three months, besides winding up business operations immediately.

In 2002, SEBI had first directed PACL to align its schemes as per CIS norms. The company challenged SEBI in the Rajasthan High Court and secured a verdict in its favour. In 2011, SEBI moved the Supreme Court challenging PACL’s claims. The SC roped in the services of IT department and CBI to conduct an enquiry into PACL’s workings.
In February 2014, CBI registered a case against the promoters of PACL on alleged charges of misappropriation of public funds. This strengthened the position of SEBI, which directed the company to wind up operations.

PACL may approach the Securities Appellate Tribunal (SAT) for relief against the SEBI order. If SAT upholds SEBI’s views, it may well be the end of the road for PACL.