Habits: An Adventure With The Self 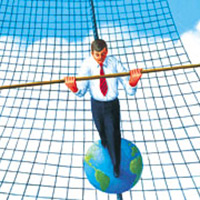 14 January, 2015
Print this article Font size -16+
It was two in the afternoon. Amit was in the cardiologist's room. The chill of the air conditioner was cooling an otherwise hot and humid Mumbai afternoon. He was relaxed, calm and confident.
The state of affairs was very different from what it was two years ago. His weight and cholesterol had all been consistently high for the past three years. "At this rate, you are two to three years away from a heart disease", his cardiologist told him. He didn't like himself. Premature greying, stress and distraction were affecting him, his work and his marital life.
Hehad started a strict exercise and diet regimen three years back when he had tested positive for high cholesterol. There was an initial dip in the cholesterol levels when he started. However, the figures crept back up. Travel, increased responsibilities and stress did not let them drop. It wasn't that he didn't know what to do or want to do it. He was not able to do it.
A very different Amit was sitting in the doctor's chamber today. His cholesterol and weight had dropped to acceptable levels. He had quit his seventeen year old smoking addiction. A calm, confident and happy air surrounded him.
What Changed?
"We are what we repeatedly do. Excellence is therefore not an act but a habit" Aristotle famously said.
This is the power of habits. Habits make and break a man. We know this intuitively. The acts of learning, speaking or walking are habits ingrained in us. From our first thought in the morning to last actionat night is a habit. The route to work, theinstinctto brush, are all a result of habits created either consciously or unconsciously.
Habits are born from our purpose (or the lack of it), the environment and the people around us. How may we leverage this power to create the life that we want?
This series deep dives into the science of habits. It aims to help leverage our natural routines to create the life we want to lead. This is similar to taking hold of the rudder of our life and consciously steering it in the direction we want it to go.
What Are Habits And How Are They Created?
The human brain is an incredibly powerful device. It has evolved over the civilization and helped us be aware and create from that awareness. Ever watchful of the dangers, the pre-frontal lobe (outer brain) keeps itself free for new experiences. It therefore keeps identifying and moving routine activities to an interior part of the brain called the limbic brain. The moment the brain recognizes a familiar pattern, it moves the pattern to the limbic brain. This is good. It helps the brain keep itself free for more important things, spotting danger for instance. Charles Duhigg has written a magnificent book called 'The Power of Habits' that helps understand this better.
How To Use This Power
First, decide what you want to achieve. Keep it simple. Pick one area. It may beshedding weight, writing a book, learning a music instrument orimproving relations with your spouse (or anyone else for that matter). Deciding the area right now may be a very good idea. Do write it down.
Second, know that massive actions never work. As adults, there is a desire to set larger targets. For e.g. one hour of exercise, dieting for a month etc. Massive actions drain one's willpower at a very rapid rate (more on this later).
Initial motivation may push us. However three weeks down the line or at early signs of success, motivation caves in, leadingus right back to square one. American psychologist Roy Baumeisterin fact argues that it is not possible to lose weight on a sustainable basis by dieting (Willpower, Baumeister).
Third, we are creatures of our routines. It is almost impossible to change routines (excluding personal upheaval). Massive change introduced to already established routines will get worn and torn as it conflicts with existing routines.
What can be done though is harnessing these routines by planting tiny seeds. As the seeds are planted in the right place, a sapling takes form. With care, the sapling then becomes a tree. A tree has the power and willnot be uprooted easily.
Habits built the right way become a force in our lives. First we create them and then they create us. Amit started his transformation by drinking a glass of water and lemon the first thing in the morning.
It is possible to unleash this power for oneself. Come, let us start an adventure with our self as we work to harness the power of habits.
Let us create the life we are meant to lead. The world is limitless. Shall we take the first step?

Read Also: Willpower & The Left Hand
The author is an engineer from IIT BHU and an MBA from MDI, Gurgaon. He has worked with General Electric, Proctor & Gamble and Infosys. Reach him at [email protected]
Tags assigned to this article:
more 4 lifestyle afterhours vivek slaria green latte