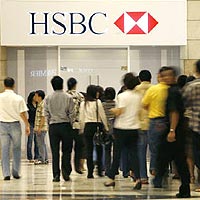 08 November, 2014
Print this article Font size -16+
HSBC Holdings Plc said pretax profit rose 10 per cent to $14.1 billion in the first half, as its three-year cost-cutting plan started to pay off, but earnings fell short of expectations due to a fall in revenue.
Its shares, which had spiked to a more than two month high the previous trading session, were down 3.4 per cent by 0843 GMT on 5 August' 2013.
Europe's biggest bank's pretax profit was up from $12.7 billion a year ago but fell short of the average $14.6 billion expected by analysts, on the basis of figures from 14 banks and brokerages polled by the company.
Revenue fell 7 per cent to $34.4 billion as the bank said western economic growth remained muted and growth in China and Asia slowed, while regulatory reforms added costs for banks.
HSBC is focused on cutting costs and restructuring measures which remain essential in an industry struggling to grow.
Stuart Gulliver, chief executive, said in a statement: "Both reported and underlying profit before tax increased in the first half. These results demonstrate that we have continued to make progress on delivering our strategy."
Gulliver, who is two and a half years into his cost-reduction drive, had cut 46,000 jobs by May and sold or closed 52 businesses. He is expected to continue to retreat from countries where HSBC lacks scale.
The bank said in May that employee numbers could fall to between 240,000 and 250,000 by 2016. Gulliver said at the time he would redouble efforts to drive down costs and could cut 14,000 more jobs as part of his push to lift profitability and streamline the complex bank.
HSBC said it would pay a second interim dividend of $0.10 per share, taking the total for the first half to $0.20, up 11per cent on a year ago.