HCL Technologies Profit Up 73 Per Cent 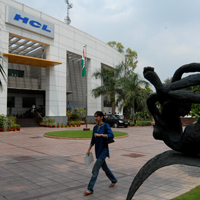 The result compared with the average forecast of 9.35 billion rupees in a survey of 16 analysts by Thomson Reuters I/B/E/S. HCL follows a July-June fiscal year.

It was also much faster than a 3 per cent rise in quarterly profit at larger rival Infosys Ltd, which has been losing market share to the likes of HCL and industry leader Tata Consultancy Services Ltd. Shares of Infosys plunged 21 per cent on Friday after it issued lower-than-expected revenue guidance.

TCS is due to report March quarter results later on Wednesday.

During the quarter, HCL added 37 customers. The company reduced 791 staff, taking the total to 84,403 from 85,194 at the end of the December quarter, maintaining tight control of headcount after shedding jobs in the previous quarter as well.

The future of the IT industry lies in transforming traditional outsourcing into higher-value services that solve business problems with technology innovations, Vice Chairman Vineet Nayar said in a statement.