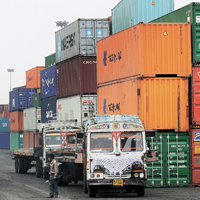 Sharp deceleration in import growth to 3.8 per cent to $37.9 billion resulted in trade deficit narrowing to $13.2 billion, the lowest in the last seven months.

Reduction in trade gap would at least lessen worries arising out of sharp decline in rupee against the US dollar.

The Commerce Ministry is expected to announce some incentives for the hard-pressed labour intensive export sector when it unveils the annual supplement of the Foreign Trade Policy.

After chairing a meeting of the Board of Trade which reviewed challenges for the export sector in the wake of difficult global situation, Commerce and and Industry Minister Anand Sharma said the target of achieving $500 billion shipments by end of 2013-2014 could be difficult.

However, he was hopeful that despite odds, exports would achieve a 20 per cent growth in the current fiscal.

Asked what could the government do for the export sector, given the tight fiscal conditions, Sharma said, "It is a question of supporting labour-intensive sectors. We have to take a holistic view to ensure that we should remain competitive globally. It is important for India to have a sustained thrust on exports," he said.


Finance Secretary R S Gujral, who was also present in the BoT, said: "The depreciation of rupee prima facie would help exporters in terms of higher realisation in terms of rupee...overall in the long term it would help the exporters".

Gloomy Economy
Friday's export figures compounded an already gloomy economic picture (Read: A Mess Of Our Making). A day earlier, India's economic growth slumped to its lowest in 9 years and core sector growth sliding to a sharp low. The day had ended with the government announcing a slew of austerity measures including a 10 per cent cut in non-plan expenditure for 2012-13, in a bid to contain its ballooning fiscal deficit. The rupee has also tumbled to record lows this week.

There was fresh evidence of a slowdown in the manufacturing sector, which accounts for nearly 15 per cent of the economy, on Friday as India's top automaker Maruti Suzuki said its car sales in May fell 5.9 per cent, dragged down by high fuel costs and an excise tax hike.

Prime Minister Manmohan Singh, who awoke to newspaper editorials accusing him of weak leadership and demanding that he take action to arrest the economic slide, was due to hold a meeting of his economic cabinet on Friday evening.

Officials downplayed the importance of the meeting, saying it was routine. But it caps a bad week for the government, which not only has had to contend with bad economic news but a national strike on Thursday against a steep petrol price hike.

The government was expected to partially roll back the increase as early as this weekend.

The only item on the cabinet meeting's agenda was a proposal to remove restrictions on the export of skimmed milk powder, and one minister said that the economic situation was not discussed.

Faced with a barrage of dismal economic data in the past few months, the government's chief strategy has been to blame the downturn on high global oil prices and the euro zone debt crisis, while insisting that this is a temporary blip and growth prospects are still good.

This has infuriated investors who say a string of policy u-turns by the government and its failure to take aggressive action to narrow its rising trade and budget deficits and encourage more foreign investment are also to blame. The UPA government is likely to leave a legacy of declining growth, high inflation, huge deficits and loss of business confidence.

Piecemeal Approach
"We believe policy makers' decision to continue the bad mix of growth since the credit crisis is at the heart of most of the macro challenges facing the country," Morgan Stanley economist Chetan Ahya said on Thursday.

The government has been criticised for its piecemeal approach to the economic crisis so far. Economists were sceptical about the impact of austerity measures announced on Thursday that included some curbs on government spending.

In the three years before the global financial crisis, India was roaring with growth above 9 per cent and ambitions to challenge China as the world's top emerging economy.

Weather forecasters said there was another dark cloud that, unfortunately for India, may not be bearing rain. They said India's annual monsoon rains may be late this year but that it was not yet time to panic.

The rains are crucial for farm output and economic growth as about 55 per cent of the south Asian nation's arable land is rain-fed, and the farm sector accounts for about 15 percent of a nearly $2 trillion economy.


In 2009, poor monsoon rains led to the worst drought in nearly four decades, forcing India, a large producer and consumer of farm products, to import foodstuffs such as sugar at sky-high prices, hoisting global prices to record highs.