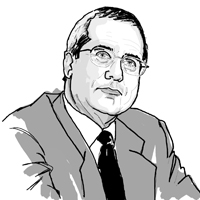 The area within energy efficiency that gets the most attention depends on the sector. For example, in cold parts of India and cold parts of Europe, insulation would be very important. Sometimes, it's the intersection of IT with production processes or buildings. An awful lot of what we need to do in buildings is just making sure things are turned on and off at the right time, and increasingly we can manage them remotely, and making sure that thermostats work well. So, insulation as I mentioned before, would be one. And the IT side of buildings and process control would be another. It's amazing how much people can save if they really focus attention. Dupont is saving now $3bn a year on energy efficiency some of it just by focus, some of it by being careful, other parts through IT control technologies and other parts through investment in things like insulation. So energy efficiency comes in many forms. It needs focus right across the board.

What kind of investment - private or public - do you see flowing into green energy?
It depends on the period we look. It's certainly the fastest growing of all sources of energy. Around the world I would expect these kinds of energy sources to grow to something like a half or more of total energy over a period of 20 or 30 years. It's difficult to give a precise figure on investment in any particular year. But I suspect we're going to see hundreds of billions of dollars per annum around the world over this next decade flowing in and that could reach a trillion dollars per annum before the end of the decade.

In the existing portfolio of renewable energy, which do you see getting the most of this share in 2012?
Well, it depends where you look. I would have thought that in India that the most rapidly growing form of renewable energy would be solar. And you're already seeing quite substantial solar thermal and solar PV energy in places like Rajasthan. I chaired the Momentum for Change event with the Secretary General of the U.N. at the UNFCCC meeting in Durban this December. And we displayed 10 new innovative projects from around the world. The Indian example was a solar power of substantial scale in Rajasthan. That was very impressive. I suspect in India the biggest expansion will be in solar all the way from quite large-scale generation to outfits like Selco (run by Harish Hande in Karnataka) which has very small-scale solar together with microfinance for households and small shops. I think right across the in India you're going to see the biggest expansion in solar energy.
break-page-break
Also, you've got to remember that Suzlon, an Indian firm, is one of the largest suppliers of equipment for wind energy. So India, I think, is going to be one of the leaders in this area both in terms of technique, as well as in various administrative and financial arrangements. The right financial structures are vital: it's one of the reasons why microfinance is very important.

Which country or part of the world do you see leading the green energy race?
It depends whether you think in terms of implementation or rate of change. I think, amongst the major players, the biggest rate of change is in China. And the 12th five year plan which was agreed in China in March of this year is the most important new direction for them. Now the quality of growth is central (particularly concerning emissions globally) and innovation rather than catch-up technology is also central.
In terms of efficiency and implementation, as a fraction of the economy, I think you'll probably have to look to the Scandinavian countries in Northern Europe. They've gone the furthest. So in terms of rate of change, it's China. In terms of absolute scale, it's also China. I think what we're going to see is Europe and China in the lead in the implementation story in this decade. India will be following. And that may unfortunately, leave the United States behind.

Do you see any key policies that would come about either supporting or working against clean energy in 2012?
I think that there are many policies against clean energy. Fossil fuel subsidies around the world and primarily in the developing world run to hundreds of billions of dollars per annum. And they are deeply damaging. And whether it is India or other parts of the world, I think fossil fuel subsidies are clearly detrimental to the expansion of clean energy. Governments can save vast sums of money by abolishing those subsidies and that would give them the revenue to help protect the poor directly in a much more efficient way than giving fossil fuel subsidies to everybody. And of course, it would help fund the resources to invest in the research and development of new forms of energy. So I would start by getting rid of fossil fuel subsidies and then by starting to tax hydrocarbons for the damage they do to our children and grandchildren and indeed the damage they do to us by the pollution they emit directly. So I think these taxing and pricing issues are important damaging part of the story.

The positive part of the story is that feed-in tariffs are probably the most proven way of getting good expansion of investment in green energy. The emission standards for cars are a proven method that works pretty well. And I think in some countries insulation and energy efficiency standards can help. Finally where we can, and that's increasingly the case, either a carbon tax or carbon trading. And those carbon-trading schemes are developing around the world like in Australia, China, Europe and California. You have your own energy-efficiency trading scheme beginning in 2012 in India.

What level of convergence do you see in costs between renewable energy and fossil fuels?
I think that we're going to see the costs of renewables continuing to fall, particularly in solar. I suspect that the price of oil will stay around $100 per barrel. You'll start to see natural gas prices disconnecting from coal prices and becoming more of a competitor with and a substitute for coal. But still, a lot of the new methods for natural gas are quite expensive and are quite a long way off reaching large-scale outside the USA. So I think we're going to see quite high prices for hydrocarbon, a $100 or so for oil and that will mean that with the fall in price of renewables over time, you're going to see competitiveness. But it's not there yet. And of course, you have to deal at least in electricity with problems of intermittency and storage. That's again something where we will see progress in the coming years. I believe that India could be a big home for this kind of progress. India could be a real leader because India has great renewable potential and substantial technology skills. Lot of what we're talking about here will be the new energy and industrial revolution. We call it can industrial revolution because of the necessary scale of change. We must as a world cut emissions per unit of output by a factor of eight over the next forty years to have a reasonable chance of holding temperature increases to 2 degrees centigrade above the 19th century - the UNFCCC agreed target.

Which sector do you think will be most innovative in adopting and finding solutions regarding green energy?
I think the car industry is changing very rapidly. Who would've thought 5 years ago that General Motors will be making an electric car? What one can hope for is that Indian-made cars like the Nano and so on, will move to hybrids and electric propulsion. And overtime that electricity will become less and less dependent on hydrocarbons. In the medium term, I think there will be particularly strong progress in the transport side. But remembering that if transport is more dependent on electricity then the electricity has to be produced in a low carbon way. Across all sectors energy efficiency will be vital.

Do you see any progress with respect to technology transfer and Intellectual Property Rights for climate-friendly technology?
With IPR, it's interesting to see how things have changed. 3-4 years ago, China was arguing that IPR and technology transfer are the most important part of climate change discussions. They don't do that much anymore. Now they're shifting over to emphasizing the importance of the rich world providing the ability in terms of resources for the poor parts of the world to make the investment. And I think the case for the rich world helping the poor world to make that investment is absolutely fundamental. So, I think that the IPR issue will not be so severe. And the main reasons why China and increasingly, India are starting to see it differently is because they themselves are getting good at this story. So the green race is on. Increasingly countries like China, Brazil, South Africa and India are seeing themselves as having a chance of doing pretty well in this green race. Unfortunately, if you look at the story of low-carbon growth within the overall growth story, all too often, in many parts of the world including India and my own country, the U.K, we talk as if it's a choice between climate responsibility and growth. That's a fundamental error. Low-carbon growth is the growth story. High-carbon growth will kill itself. I think the most important breakthrough I would hope to see is that around the world more and more people will understand low-carbon growth is the story of growth and development in this century. It is the way to overcome poverty. It can't be achieved instantly. We'll have to manage through a transition. But that breakthrough in understanding is beginning to come; the power of the example will be crucial.

What role do you think nuclear power will play in 2012?
In the next year, the key issues are the decisions that people take for nuclear rather than the actual building. In the next twenty years, China will probably build about 200 nuclear power stations. And after Fukushima, they are looking at safety issues. I would be pretty confident that the decision to build on scale will be confirmed and they will go ahead. I suspect that UK will go ahead with nuclear. I suspect that India will also go ahead with nuclear. So I think around the world, over the 20 or 30 year horizon you might see nuclear 10 per cent or so of total electricity generation. That's obviously a ball-park figure. Nuclear won't be dominant but it will be significant.