Green Man With A Golden Heart 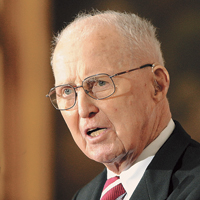 During the 1950s, when the global yield of paddy was one tonne per acre, agriculture scientist Norman Borlaug termed it as a waste of land and water. It was clear to him over 50 years ago that the only way a country can have food security is through productivity enhancement. That is, increase in yield rather than area expansion.

Born a farm boy in Iowa, US, Borlaug studied forestry at the University of Minnesota. Later, he became a plant pathologist and started work on wheat in Mexico in early 1950s as a Fellow from Rockefeller Foundation. He concluded mankind needs to develop new varieties that have a different kind of plant architecture and that can respond well to irrigation and to soil nutrition, anywhere in the world. He was one of the most determined hunger fighters of all time.

He was convinced of the need to have high-yielding varieties. Borlaug was also a firm believer that none in this world should be hungry and hunger should be satisfied with nutrients. So, he supported the use of nutrient supplements, for which environmentalists criticised him, without understanding that he never advocated any particular system or product.

When Indian media reported in 1966 that the country was facing food scarcity, Borlaug made a bold statement, at the cost of embarrassing the US administration, that unless India gets out of PL 480 wheat that was sent from US, the country will never progress.

Even as he was exploring new high-yield variety seeds, the Japanese discovered Norin 10, a short rice plant with long panicles so that it doesn't easily fall down. The gene was brought to the US and by 1962, Borlaug developed more varieties with same characteristics.

Around 1960, I wrote to the agriculture ministry that we should get Borlaug to send some of them to India and also explore the feasibility of sharing his experience in India. Unfortunately, it took two years for the process to be completed. He arrived in India in March 1963. I went along with him to Uttar Pradesh, Punjab,  Haryana, Madhya Pradesh and Bihar. It took less than one month for him to understand the cultivation techniques and the soil and irrigation methods.

On his birthday, 25 March 1963, we gave him a surprise party with Mexican music. Borlaug announced that he would travel to Pakistan to pick a few dwarf varieties that was sent to them in 1961 under the Middle East Food Agriculture Organization programme. He personally identified them and sent us a large variety in September 1963. That was the starting point of an intensive programme called Mexican dwarf variety plantation. He sent 100 kg of seeds to us and we had substantial success across the northern states. Borlaug was thrilled to see that it yielded 5-10 tonnes per acre as against the one earlier.

In 1964-65, he sent 200 tonnes of seeds for farmers' demonstration. It had dramatic effect on poor farmers. Borlaug was so attached to the project that he visited India every year regularly for the next 10-15 years, till his engagements in Africa around 1980s consumed more time. He was concerned about Africa as it cannot grow without agriculture growth.

Borlaug focused on three aspects of the problems faced by farmers: use scientific knowledge to prevent diseases in plants; public policy — he felt without a well-framed public policy, no technology can strike root and bear fruit; and, public education — unless awareness is channelled to the target group, no amount of good technology will help poor farmers overcome his poor yield.

As told to M. Rajendran