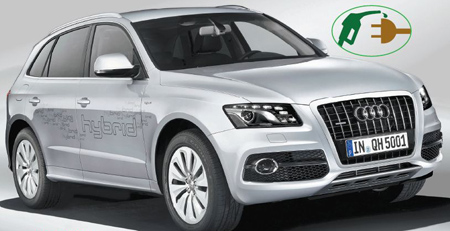 Audi Q5 Hybrid Quattro
German car maker Audi is part of the Volkswagen group that is already the No. 1 premium car maker in China and Europe and aims to be the world No. 1 by 2015. Audi has now fired its first salvo in the alternative-fuel battle by taking the wraps off the Q5 Hybrid Quattro crossover. To be commercially launched in 2012, the Q5 hybrid combines a 2-litre petrol engine with a 44-hp electric motor to generate 245 hp of power, and 480 Nm of torque. According to the company, the crossover consumes 6.0 litres of fuel per 100 km, and emits 159 gm of CO2 per km. On pure electric power, it can travel up to 3 km, with a top speed of 100 kmph.

Porsche Panamera S Hybrid
Sports car maker Porsche, also part of the Volkswagen family, launched its first four-door saloon, Panamera, last year. At Geneva, it went a step ahead and launched its hybrid version, which is available on order, though not in India yet. A 3-litre petrol engine that delivers 333 hp of power combines with a 47-hp electric motor to give the saloon a total power output of nearly 380 hp. But then, you wouldn't expect any less of a Porsche, hybrid or not. In pure electric mode, though, the car can travel just 2 km. Performance improves if you opt for a set of specially-built-for-Panamera tyres from Michelin.

Renault Fluence EV
The Fluence sedan, incidently, is the car that Renault will launch first in its re-entry into India later this year. However, it will be the regular fuel version, as opposed to the electric Fluence that the company showcased in Geneva. Sometime this year, Renault will launch four alternative-fuel vehicles (two of which will be hybrid) in the global market. And the car that will lead this quartet is the electric Fluence, which will be available initially in Denmark and Israel. The car can travel 160 km on full charge, and takes 4-8 hours for a full recharge. The electric Fluence also has photovoltaic cells on its roof, dashboard and rear parcel shelf, to complement its lithium-ion battery. ‘Hybrid' of a different kind?

Volvo V60 Plug-In HybridAnd now, here is a best-of-two-worlds proposition — a diesel hybrid car from Sweden's Volvo. The company claims that CO2 emissions are amazingly low at less than 50 g/km, making for fuel consumption figures of 1.9 litres per 100 km. The front wheels are driven by a five-cylinder, 2.4-litre diesel motor that generates 215 hp or power and 440 Nm of torque, while the rear wheels are driven by a 70-hp electric motor that is connected to a 12-kWh lithium-ion battery pack. And if the battery is fully charged, it helps the car — when being driven only in electric mode — cover 32 miles (51.5 km) — that is a lot for a big station wagon.

Honda Jazz HybridJapanese major Honda's Jazz hatchback may not have been a hit in India (thanks to its high price), but it has been a success in other countries. And now the company has launched a hybrid version in Europe. It has a 1.3-litre, 87-bhp petrol engine and a 13.5-bhp electric motor that's hooked up to a nickel-hydride battery pack that gives it a top speed of 177 kmph. It also comes with a hands-free Bluetooth, and a display system that tells the driver when the electric motor is working. Exactly what you need to jazz up your garage.