Great to be back training at national camp: Sharath Kamal

Great to be back training at national camp: Sharath Kamal

New Delhi [India], November 6 (ANI): Ace Indian paddler Sharath Kamal feels excited about being able to resume training at the national camp for Table Tennis, which is being held from October 28 to December 8.
The camp comprising 11 players (5 male, 6 female) and four support staff will be conducted by the Table Tennis Federation of India at the Delhi Public School, Sonepat.
The camp has been sanctioned at a total cost of approximately Rs 18 Lakh (plus air travel and medical expenses).
Campers are staying in the residential facilities at DPS, Sonepat. The camp will abide by the Standard Operating Procedures set up by the Sports Authority of India for the resumption of sporting activities.
Sharath on Thursday shared a glimpse of his training session where he looked in great touch. The four-time Commonwealth Games gold medalist was seen practising forehand and backhand shots as restarted his training.
"Feels great to be back training at the national camp," the Indian paddler tweeted. 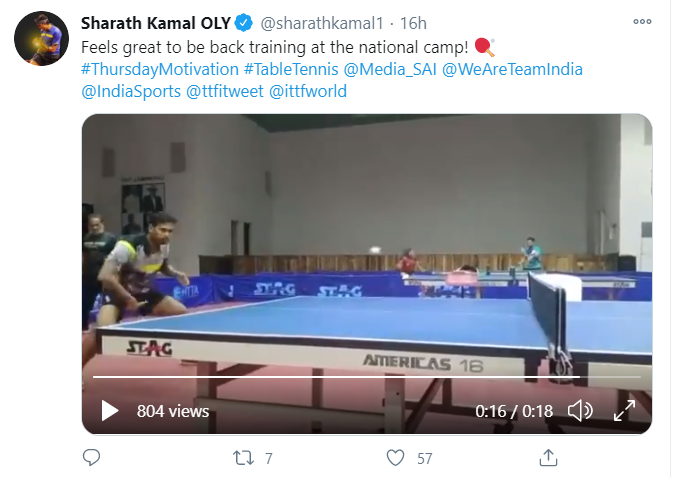 This is the first national camp for Table Tennis that is being held after the announcement of the nationwide lockdown due to coronavirus in March this year.
Sharath was last seen in action during the Oman Open in March where he lifted the coveted trophy after defeating Portugal's Marcos Freitas in the final.
This was Sharath's first-ever IITF title since winning the Egypt Open in 2010.
India has performed very well in Table Tennis in recent times winning 8 medals at the 2018 Commonwealth Games as well as winning medals for the first time ever at the Asian Games the same year. (ANI)