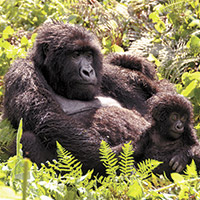 The Munros
If you want your mountains in small, easily climbed bites then head to Scotland and ‘bag’ a few Munros. In 1891, Sir Hugh Munro came up with a list of every mountain in Scotland over 3,000 feet (914 metres). He counted 277 of them, although today the list has been revised to 284. Almost immediately, the mountains on his list were called ‘Munros’ after him and Scottish climbers began to climb as many as they could. There’s an English expression for collecting sporting trophies — it’s called  ‘bagging’, and is derived from hunters putting birds they have shot into a bag. So climbing 914-metre peaks in Scotland came to be called ‘bagging Munros’ and in 1901 the Reverend A. E. Robertson claimed he’d ‘bagged’ the lot. Today, climbing Munros is a popular Scottish hobby and thousands of people claim to have climbed them all. I’m a long way behind, but I have bagged a few Munros when I’ve been in Scotland. Of course, 914 metres wouldn’t qualify as a bump, let alone a mountain, in the Himalayas, but a few of them do require serious planning and exertion. On the other hand, driving around Scotland you may often see a useful little hill off to one side, park your car, stroll up to the top and 20 minutes later you’ve ‘bagged’ a Munro.

Gorilla Tracking
If you’d like your wildlife encounters to be large and close up (unfortunately the price tag is high), then head to Africa and go gorilla tracking. A silverback, the fully grown male leader of a gorilla family, makes a Japanese sumo wrestler look puny and none of that weight is fat. The tiny country of Rwanda is famous for gorilla tracking and once you’ve got to the front of the queue and forked out $500 you join a small group and are led into the jungle to encounter one of the gorilla families in the Volcanoes National Park. Your visit to these parts is strictly controlled in terms of the number of visitors and length of the encounter, although how close you get is left up to the gorillas themselves and very often they seem to have just as much interest in their human visitors and are keen to come up for a close look. The money overseas gorilla visitors bring to the local economy also ensures their survival. Local villagers are very aware of their financial importance as a tourist attraction. Gorilla encounters can also be arranged in neighbouring Uganda and, if the political situation makes it safe enough, in the Democratic Republic of Congo. My most recent gorilla meeting was at the Virunga National Park in the Congo.

Bondi
When it comes to city beaches, this year, the world’s attention will be firmly fixed on Rio de Janeiro where, for many visitors, Ipanema and Copacabana will be the big attractions while football will only be a minor distraction. Lots of other cities have important urban beaches, like Chowpatty in Mumbai, Coney Island in New York, Brighton Beach, a short train trip from London, or St Kilda in Melbourne, but for me connecting ‘beach’ and ‘city’ will always spell Bondi, Sydney’s magnificent strip of golden sand. I’ve swum at Bondi at dawn, dined at the iconic Icebergs restaurant overlooking Bondi, but on several occasions I’ve travelled from the centre of Sydney to Bondi the hard way — I’ve joined 25,000 other assorted lunatics to run the 14 km distance from central Sydney to Bondi. Of course, the winner is most often some gold medal winning African marathon runner, but just joining that crazy group of runners is a great experience.

Surat
There are so many ‘big’ destinations in India, places with great historical importance or artistic beauty that the little ones are easily forgotten. You’re likely to find that you’re the only visitor in town. Take Surat, for instance. India’s eighth largest city and Gujarat’s second largest where there may be plenty of business visitors — think diamonds and textiles — but tourists are few and far between. In fact, Surat has  had a long succession of visitors, going right back to Lord Krishna. Then, there was a succession of European arrivals, starting with the Portuguese who built a riverside fort here in 1540. For the British, it was the first headquarters of the East India Company, which shifted to Bombay in 1689. Close to the riverside you can still find traces of the English Factory and in the centre of old Surat there’s a totally neglected English cemetery with magnificent tombs from that period. The Dutch cemetery also features Armenian graves — clearly everybody was visiting Surat back then. For me, the big Surat attraction was looking for the grave of Thomas Coryate, an Englishman who may well have been India’s first foreign tourist and died in Surat in 1617, after spending several years walking all the way from Europe to India. I tracked down a mysterious tomb in the nearby village of Swally; it probably isn’t Mr Coryate’s final resting place, but it was listed that way on old British navigation charts and that was good enough for me, although finding it was a story in itself.

Ladakh
With such a large part of the Himalayas and other great mountain ranges across the country, we’re spoilt for choice. For me, the undisputed mountain destination remains Ladakh. Since my first visit almost ten years ago, I have gone back at least five more times over the years and it never fails to make my jaw drop when I disembark from the plane. However, my most memorable Ladakh trip was the one by road that I did from Delhi to Leh via Manali and then back to Delhi via Kargil, Srinagar and Jammu. Granted, you’ll need time to do this monster of a road trip, but it’s worth taking the time out for. An adventure of a lifetime, the road trip will take you through landscapes now made famous by TV commercials, yet offering precious seclusion. Try and visit during the shoulder season, when things aren’t completely dead but you’re still able to avoid the mad tourist rush. Rent a motorbike and do day trips using Leh as a base. My favourite attractions are the monasteries, where I never fail to feel the stillness of time across centuries. Visit Thiksey for the morning prayer and the 15-metre-high Buddha, but also pay a visit to remote Hemis and tiny Stakna — just to complete the round of monasteries. A visit to Nubra is well worth it — the 32-metre colossal Buddha overlooking the sand dunes of the valley is a grand sight from the Diskit monastery. Play a game of cricket with the locals and hug a two-humped Bactrian camel while you’re at it. No trip to Ladakh is complete without a visit to the great lakes.  Pangong Tso is a jewel nestled amidst the mountains. Try staying a night or two at a local homestay rather than a hotel — to complete the sense of being away from civilisation, something that Ladakh still manages to instill in travellers. Go before it loses that ‘far far away’ feeling.

Bandhavgarh
Bandhavgarh in the heart of Madhya Pradesh’s tiger country is my choice destination for wildlife lovers. It’s not entirely so because it’s home to the tiger and, therefore, affords a chance to view this magnificent creature in its natural glory. Everything about that trip impressed me — right from the drive from Jabalpur airport to Bandhavgarh through the beautiful countryside, to the accommodation options in the heart of the wild, to the magnificence of the jungle and the beasts it is home to, to the riveting local folklore about their ‘king’, the reigning alpha male tiger of Bandhavgarh, to the local food. As I was standing upright in my jungle vehicle doing the morning safari, the sun came out in full, lighting up a vast open expanse of grassland, and the wind rustled through my hair and carried the morning sounds of the waking animals. Even though I was still chasing the tiger, I knew I had already witnessed something special.
Goa
You could blame me for being unimaginative with this choice as well, but honestly, there is no other beach destination like Goa. Only lazy travelers can still call it completely commercialised, because there are still dozens of beaches both up north and down south which still offer seclusion. Goa is a place where one can very easily find places to get lost, in gorgeous natural settings, and still come back to civilisation fairly easily — if you know what I mean. Again, motorbiking is my favourite way to discover the place — set an easy pace, throw away the map  and the guide book for once and just find some place using the advice of locals. My favourites remain the beaches far up north at the border with Maharashtra.  Paradise beach, that strip of sand jutting into the sea separated by a sliver of water from Reddy beach, is my place to just lie on the sand and lose myself. Friendly people, great weather, food to die for, but most of all, the sense of being one — both with the universe and with humans — is something I only feel in Goa.

Udaipur
With almost every city in India standing on a rich foundation of history, this is also a pretty tough choice. But for the sheer spectacles it offers, on so many levels, Udaipur would be my choice in this category. Steeped in history, the city has so many things to do in and around it that 3-4 days easily go by. Start with a visit to the City Palace and stick around for the Light and Sound show that transports you through Mewar history. Do the mandatory boat ride around Lake Pichola and have dinner at the Jag Mandir in the middle of the lake. Being an avid photographer, I enjoy the sunset over Lake Pichola from the viewing platform at the end of the Udaipur ropeway. But by far, my favourite attraction around Udaipur is the staggeringly beautiful marble Jain temples at Ranakpur. Make a day trip of it, and you will witness the best that humans can do with marble, and faith.