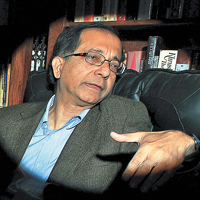 In a novel research paper published as part of the Working Paper series by the Department of Economic Affairs of the finance ministry in March 2011, Basu argues that following his suggestion would greatly reduce the tendency to accept a bribe.

Basu's point is that in some cases of bribes — what he dubs "harassment bribes" — people are forced to pay just to get their due. It is a well acknowledged fact that to get the tiniest things done in many offices, a small bribe is almost expected to be asked for and given.
How many licences, passports or ration cards, for example, are issued without some money for mithai? Similarly, getting even routine no-objection certificates from any department dealing with property requires payment of specific amounts.

For the bribe giver to lodge a complaint or help the authorities catch the briber taker, the fear of reprisal has to be very low or absent. In most ordinary situations, unless the bribe giver is certain that he is unlikely to face or encounter the bribe taker ever again, the incentive to seek redressal is very low.

Further, it is not clear how such an initiative would eventually work out in the courts. How do you put forth the evidence? Will it all be based on hearsay? Your word against his? Or do you carry a hidden camera to record the evidence?

Moreover, with petty bribes involving small amounts, will it be worth the effort ? The legal system — which in reality is actually one of the biggest areas of harassment, and many settlements take place purely because of how big of a hassle it has become — is slow to mete out justice, if it metes it out at all.

That the onus should be lifted from the bribe giver is accepted since it is a bit like penalising the rape victim for being a party to the crime. What remains uncertain is whether this alone can achieve the desired result (a big drop in petty corruption).
However, it is to tackle this kind of petty corruption that Kaushik Basu suggests a change in law. Tackling the big fish, however, would take more than just changes in the law; it will take a transformation in the moral fabric of the power holders and a justice system that works hard to punish the corrupt.