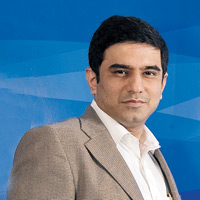 Rajesh Kamat does things differently. when he launched the now-successful Hindi entertainment channel Colors in July 2008, he chose Bangkok as his launch pad. The expected spectacle of hip-wiggling models was missing.

Instead, it was a macho show, with chest-thumping Akshay Kumar roaring on stage with a 600-cc Yamaha bike, and pulling out snakes from under the tables.

With sound and smoke, what Kamat effectively produced was a curtain raiser of Khatron Ke Khiladi (KKK), Colors's multi-celeb, multi-million dollar reality show. It was also a ‘disruptive' tactic of doing the unexpected. Kamat's prescription for his success. At the launch, he kept throwing the two ‘Ds' at those wanting to sample what was to come on the new channel — ‘disruptive programming' and ‘differentiation'.

Cutting Through The Clutter
When Kamat launched Colors, he was a young CEO at 35, but was also aware that he was a late starter. The general entertainment space on television was crowded, and had seasoned players such as Star Plus, Zee TV and Sony Entertainment Television (SET). He had little time to prove his mettle. Two more heavyweights had already entered the ring — 9X and NDTV Imagine. He had to quickly make his mark.

He went on air not apeing the ‘Saas-Bahu' soaps, but took them head on with fresh ideas. He pitched Fear Factor-KKK. "We had to cut through the clutter," says Kamat. "The youth were bored of the never-ending bedroom conspiracies." But he could not ignore soaps, the staple diet of entertainment television. So came Balika Vadhu, the travails of a child bride. It was a huge risk, but paid off. KKK never managed huge audiences, but it did create what Kamat calls the buzz factor. On the other hand, the numbers were pulled in by Balika Vadhu and the never-ending mythological Jai Sri Krishna. Within weeks, Colors was hobnobbing with the leader, Star Plus, and in the week starting 15 April this year — nine months after launch — Colors emerged No. 1.

Kamat had television experience with Star India for over four years in marketing and international business. But his laboratory for discovering the ingredients of successful television showbiz was as India head of Dutch content production house Endemol. In the two years — 2006 and 2007 — at Endemol, Kamat produced a few hits on Indian television. He gave Bigg Boss (an adaptation of UK's Channel 4 Big Brother) to Sony before reclaiming it back for Colors in Season 2. He developed Fame Gurukul for Sony and then four seasons of the runaway success Laughter Challenge for Star One.

Shriparna Mukerjea, former senior producer with Endemol, remembers Kamat as "a great team guy". She says he is successful because he "was willing to take risks", but admits this sometimes boomeranged. For instance, the heavily advertised shows Mission Ustad on 9X and Fame X on Star Plus bombed partly because "he took on too much at one time."

Kamat cut his teeth in media and entertainment with Star India. During 2002-06, he assisted then COO Sameer Nair (who now heads NDTV Imagine), and was in charge of international business projects. Kamat acknowledges his learning there, but it was not a period of great breakthroughs for him. His old boss, Peter Mukerjea, then CEO of Star India, remembers him as a "quiet chap", who was "not able to get Star's international business up and running in spite of having Sky in the UK and Newscorp offices around the world". Mukerjea says Kamat's exit from Star was probably fuelled "by the fact that he was going nowhere at Star. He was seen as good but not a star performer".

It was just as well for Kamat. "Star taught me scale, but then I took one step back for a more rounded experience. What Endemol has taught me was the difference between a business plan and cash flow," he says. "In Star, there was never an issue of cash." The marriage between Endemol and Kamat worked. Endemol India has forged ahead with revenues doubling since 2007 to an estimated Rs 140 crore a year now.

At Colors, part of Kamat's strategy is the use of a plethora of celebrities and money to pull in the audiences. Industry speculation is that Colors paid over Rs 40 crore for the 16 episodes of KKK's first season. And now Kamat has roped in Amitabh Bachchan as the new host for Bigg Boss 3. Kamat once boasted with some elan that Viacom18 — the Viacom-TV18 joint venture that owns Colors — had put together a war chest of Rs 1,000 crore.

Colors's cash burn — believed to average Rs 3 crore a day — is the highest in the industry. Many competitors and industry pundits think Kamat is treading thin ice. Nitin Vaidya, COO, Zee TV, says Colors's success is built on a few big shows such as Balika Vadhu and, now, Uttaran, and cannot sustain. "Being No. 1 is generally about spending more money and getting the ratings, but translating that to revenue is a real challenge," says Peter Mukerjea.

With the first results for KKK–Level 2 coming in, the show has revived the debate whether such expensive programming is money well-spent. The week ended 19 September saw Colors lose its No. 1 position to Star Plus, with a big decline of 41 gross rating points (GRPs), a measure of the size of audience a medium reaches, from the preceding week.

Kamat is also reputed to have paid premium carriage rates to cable operators and DTH companies to ensure he is seen and heard. High spends on brand-building, promotion and distribution for a start-up, he says, is a necessity. "I go back to my FMCG days. The typical retail model teaches you have to be next to the shop with the biggest footfalls." This means, as the viewer goes up and down on his remote, you have to be next to Star Plus and Zee TV; and for that, you have to pay a premium.

Early Returns
After a year of Colors's launch, Kamat now has returns to show. In the first quarter results for this year, Colors turned in a revenue of Rs 155 crore, an operational loss of only Rs 18 crore. Kamat is hopeful of breaking even as early as the last quarter of FY2010. In another astute revenue move, Kamat has clinched a Rs 270-crore, three-year distribution deal with the Sony-led distribution firm, One Alliance, from April this year. In a market where subscription revenue is irregular and dependent on performance, Kamat has cleverly hedged any possible downswing in Colors' ratings.

But the Colors chief is acutely aware he cannot repeat the monopoly Zee TV held in the 1990s, and Star Plus for most of this decade. He may have dethroned Star Plus, but he now has to share the spoils with both Star Plus and Zee TV in a keenly fought triangular contest. And, as Kamat admits, NDTV Imagine and Sony cannot be written off either. His strategy for the future is a complete focus on Colors. "There will be no new channels in the near future. The focus is on growing Colors's content and reach, and then monetising it."