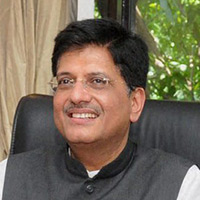 08 November, 2014
Print this article Font size -16+
Power Minister Piyush Goyal on Sunday (7 September) said that he has inherited a crisis-ridden sector. There is no low coal supply, rather the new government has inherited low coal production and loss of Rs 3,00,000 crore from state electricity boards: To correct the situation, "We will ensure quick action after SC decision to get process rolling and enhance coal output to 1 billion tonne by 2019," Goyal said.

Coal shortage at power stations was due to stocks being consumed faster for higher electricity generation, said Goyal. Hydel power production was lower due to deficient monsoons.

Goyal said that the 20 per cent increase in coal-based power production in the last three months is an achievement.

Further, he said the government will continue with the e-auction of coal to provide the fuel to the users, even in case of de-allocation of coal blocks.

"At the moment we don't have a Plan B, but for every scenario we are keeping ourselves ready. Whatever the Supreme Court decides on coal block de-allocation, we will ensure that action from our side is implemented immediately," said Goyal.

"The financial restructuring package was implemented 18 months too late and therefore it was lacking in a number of areas. We are in discussion with the states to rework the FRP," he said.

The Government has also launched the Deen Dayal Upadyay Gram Yojana with an expected investment of Rs. 43,000 crore for feeder segregation of agricultural and domestic power lines in rural India. Long term transmission projects worth Rs. 12,272 crore have also been cleared since the new Government took charge in late May. Coal linkages are to be rationalised and 32,000 MW of old power plants are going to be modernised.

Meanwhile, the Power Ministry has also finalised amendments in the Electricity Act, 2003 to launch the new wave of reforms.