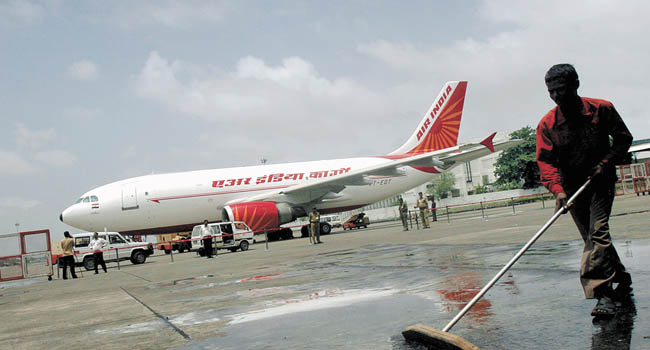 04 August, 2015
Print this article Font size -16+
The national carrier is still in dire need of cash to carry out its day-to-day operations, says Ashish Sinha


There is good news and bad news for the national carrier Air India. The good news is that the finance ministry on Friday (31 July) sought Parliament's nod for making an additional equity infusion of Rs 800 crore into Air India. This was desperately sought by Air India since December when the civil aviation ministry had submitted its budgetary requirements to the ministry of finance.
Sources say if required, the government will seek the approval of the Parliament for another round of equity infusion into Air India but the call will be made before the Winter Session of Parliament.
Now the bad news. The infusion of Rs 800 crore in Air India is just around 45 per cent of the total equity infusion sought by the national carrier as part of the annual plan requirements for 2015-16. This means the national carrier is still in dire needs of cash to carry out its day-to-day operations.
However, sources in the civil aviation ministry said the government is awaiting the report from SBI Caps which is reviewing the Turn Around Plan (TAP) for Air India. The report is expected during the second or third week of September, said a source in the ministry. “Based upon the recommendations made by SBI Caps and the decision taken by the government thereafter will Air Indi’s fate will be decided,” he said.
Air India is currently getting its annual financial support from the central government under the various milestones laid down in TAP which was implemented from 2012 and under which it will continue to receive over Rs 30,000 crore till 2022 depending upon Air India meeting the milestones.
Sources told BW Businessworld that the Annual Plan for Air India for 2015-16, submitted to the Civil Aviation ministry last December, stood at Rs 4,982 crore which included a Budgetary Support component of Rs 4,277 crore. However, the Annual Plan for 2015-16 approved by the finance ministry stood at only Rs 3,205 crore which was inclusive of the Budgetary Support of Rs 2,500 crore to Air India. “There was a noticeable cut to the annual plan for the civil aviation ministry that impacted Air India’s finances too,” said an analyst who tracks the aviation sector.
The national carrier, in fact, had requested for an equity infusion of Rs 4,277 crores for 2015-16 in line with the recommendations of Turn Around Plan (TAP)/Financial Restructuring Plan (FRP). As against this, the government provided Rs 2,500 crore in the Finance Bill for 2015-16 as equity infusion in Air India thereby leaving a deficit of Rs 1,777 crore.
However, as per the government’s statement, the total sanctioned supplementary demand for grant for the civil aviation ministry stood at Rs 820 crore which included an equity infusion of Rs 800 crore into Air India leaving a shortfall of around Rs 1,000 crore.
According to a statement submitted in Parliament by Mahesh Sharma, the state minister for civil aviation, Air India has achieved the target set out in TAP, and has made substantial progress in both operational as well as financial areas. In fact, in the last financial year, Air India reduced its losses to Rs 5,547.47 crore, the minister had stated. According to Sharma, since the implementation of TAP/ Financial Restructuring Plan (FRP), the operating loss of the national carrier reduced from Rs 5,138.69 crore in the fiscal 2011-12 to Rs 2,171.40 crore in the year ended March 31, 2015. “Net loss has come down to Rs 5,547.47 crore in 2014-15 from 7,559.74 crore in 2011-12,” Sharma had informed the Parliament.
For the record, the loss-making Air India is surviving on a bailout package approved in 2012. The debt of the national carrier is pegged at around Rs 40,000 crore.
According to Air India insiders, if the cash deficit continues Air India will face a number of operational as well as financial difficulties such as repayment of the government guaranteed aircraft loans which might result in a “default” situation resulting in the invocation of GOI Guarantee. There could also be delay in the repayment of the interest on NCDs, company executives said. According to the analyst quoted above, continued cash deficits may also result in compulsory borrowings from banks that would come at a higher interest cost adding to Air India’s woes.
[email protected]
Tags assigned to this article:
air india civil aviation ministry ashish sinha