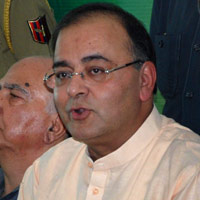 08 November, 2014
Print this article Font size -16+
Industrial licenses would be required only to make items such as tanks and other armoured fighting vehicles; defence aircraft, space aircraft and parts; warships of all kinds; and arms and ammunition and allied items of defence equipment, parts and accessories.

According to an official, this clarification would help to attract investments from private companies.

Those companies who are making equipment, casings and other smaller items and are not fully integrated as weapon system have been left out of this list, defence sources said.

"Items not included in the list would not require industrial license for defence purpose. Further, it is clarified that dual-use items, having military as well as civilian applications, other than those specially mentioned in the list, would also not require industrial license for defence angle," the Ministry of Commerce and Industry said in a statement.

Defence items are covered under compulsory licensing under the Industries (Development and Regulation) Act, 1951.

The official said the industry had raised the issue as there was confusion over several dual-use products.

"This clarification will also help in attracting more investments in the sector," the official added.

"India can be a game-changer only by allowing at least 51 per cent FDI in the sector. With access to critical technology, the domestic companies will be able to manufacture products indigenously and make India a global defence manufacturing and export hub," said a government source.

India imports defence equipment worth over USD 8 billion annually. It is one of the largest defence importers in the world with only a minuscule component of exports.

Allaying concerns of few domestic industries, the sources said that the proposal mooted in the draft note has enough safeguards to protect this sensitive sector.

"Giving controlling stake to a foreign player will be an incentive for them to bring modern technologies in India.

Besides making India as their manufacturing centre, they will also export from here. It would lead to creation of jobs," said a source.

While the government is holding inter-ministerial consultations, intense lobbying is being witnessed within the major industry chambers, the sources said. A section of the domestic industry, with less than 1 per cent share in the sector, holds a view that the FDI should be restricted to 49 per cent, while another view is that without a majority stake why would the global investor invest in India, they added.

They said that caping FDI to 49 per cent is not going to help. It would be a status-quo type situation.

"India should not lose this chance. To become self-reliant in defence sector, 51 per cent FDI must be allowed. Between 2001 and August 2013, 49 per cent foreign investment (26 per cent FDI + 23 per cent FII) was allowed. During this time, India has attracted only USD 5 million investments, which is lowest in any sector," the source said.

Between 2001 and 2013, India has received about USD 320 billion in foreign investment. The figures clearly reflect that India has not received any investment when the cap was 49 per cent.

The sources also argued that due to sagging economies in the West, multi-national companies want to expand their manufacturing base in Asia and India can become a major centre for that.

"Now the country cannot afford to miss the bus. Fixing foreign investment cap to 49 per cent will not help in getting modern technologies. Figures are clearly reflecting that 49 per cent foreign investment has not changed anything. It will be a game spoiler," they added.
Tags assigned to this article:
news 8 defence defence equipment fdi in defence industrial licensing