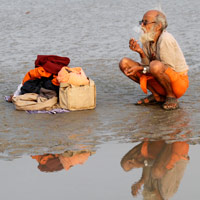 08 November, 2014
Print this article Font size -16+
An integrated programme for the conservation of river Ganga with an outlay of Rs 2,037 crores has been proposed by Finance Minister Arun Jaitley in his maiden budget today.

Jaitley said the Ganga Conservation Mission called "Namami Gange" is being launched because a substantial amount of money has been spent in the conservation and improvement of the river, but that has not yielded desired results because of lack of concerted efforts by the stakeholders.

To harness the enthusiasm of the NRI community towards the conservation of the river Ganga, an 'NRI Fund for Ganga' will be set up which will finance special projects, he said.

A sum of Rs 100 crore has been set aside for Ghat development and beautification of the river front at Kedarnath, Haridwar, Kanpur, Varanasi, Allahabad, Patna and Delhi in the current financial year since river fronts and Ghats are not only places of rich historical heritage but many of these are sacred, he said.

The budget also contains the first ever effort to link the rivers across the country with the Finance Minister setting aside a sum of Rs 100 crore in the current budget to expedite the preparation of Detailed Project Reports as a serious move in this direction, he said.