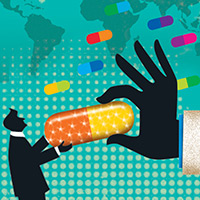 08 November, 2014
Print this article Font size -16+
Drug prices regulator NPPA is looking at bringing medicines used for treating diseases such as cancer, AIDS and malaria under the price control mechanism.

The National Pharmaceutical Pricing Authority met recently to consider ways of bringing medicines, which are not covered by the list of essential drugs, under some regulatory ambit in order to check prices, sources said.

"We are examining the possible actions to bring down the prices in public interest in case of drugs whose prices vary to a great extent and the treatment is very costly," a senior official said.

The prices of some of the medicines targeting diseases like cancer vary up to 600 per cent, the official added.

"Moreover, NPPA is also examining the prices of medicines targeting malaria and dysentery," the official said.

As of May last year, prices of 348 medicines in the National List of Essential Medicines were under control with the implementation of Drug Prices Control Order (DPCO), 2013.

The move followed the approval of National Pharmaceutical Pricing Policy (NPPP) 2012 by the Cabinet on November 22, 2012. This was later notified on December 7, 2012.

The NPPA has been authorised to fix and revise prices of controlled bulk drugs and formulations and to enforce prices and availability of the medicines in the country.

It is also mandated to monitor the prices of decontrolled drugs in order to keep them at reasonable levels.