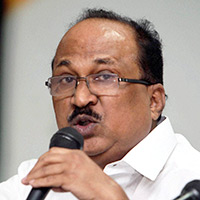 08 November, 2014
Print this article Font size -16+
The government is likely to release food grains from its stocks in order to bring down soaring food prices, Union Minister of State for Consumer Affairs and Food and Public Distribution K.V. Thomas said in Mumbai on 22 July.

"In the last few years the minimum support price has doubled. The consumption pattern has also changed along with rise in price of petroleum and petroleum products. "So to bring down the price of food, the EGoM will analyse the situation and take action that will help ease the situation. We may even release food grains from the government stocks to control the food inflation," Thomas said during a function.

To a query on whether the Food Security Bill once passed, will affect the rice and wheat exports, Thomas said," the government needs 62-64 million tonne for the food security per year. When we calculated we found that this is only 35 per cent of what we produce. So, there will be enough food grains available for food security and other domestic consumption and for exports."

The implementation of food security bill is fraught with bringing additional fiscal pressure and widening fiscal deficit to five per cent of GDP in the current financial year.

Earlier this month, the government had promulgated an Ordinance to implement the Food Security Bill.

Government's spending on the programme is estimated at Rs 1,25,000 crore annually for supplying about 62 million tonnes of rice, wheat and coarse cereals to 67 per cent of the population.

Elaborating on the issue, Thomas said many states had apprehensions on whether they will get less than what they were getting. "And after discussions we found that all the states will benefit from this."

"States like Maharashtra has apprehensions that whether they will get less than what they were getting after the Food Security Bill is passed. After discussions we found that they will be, in fact getting more than what it is getting now. So will all the states," he said.

The government will give 25 kgs food grains, including rice, wheat and millet, at Rs 3 a kg, Rs 2 and Rs 1 respectively, a month depending on the need, which will be a legal right for people under below the poverty line.