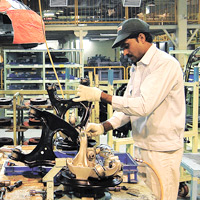 Khan defended the ONGC sale, which even some government officials said was badly handled. He said the government got the price it was aiming for.