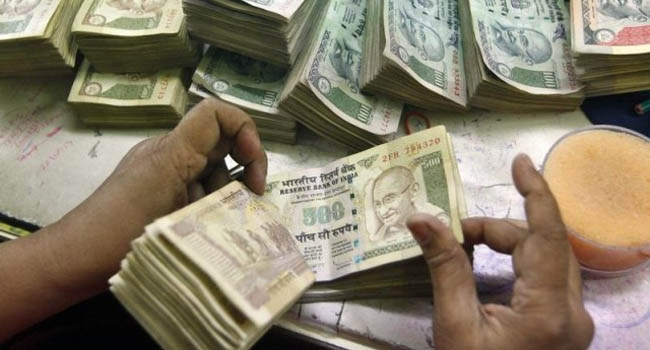 26 August, 2015
Print this article Font size -16+
The Union government can spend an additional Rs 37,160 crore during FY16 on account of both lower oil subsidy and supplementary revenue generated under some budget heads, India Ratings and Research (Ind-Ra) said.
The credit rating agency said that the extra revenue should be used judiciously for higher capital expenditure on infrastructure and on recapitalisation of public sector banks. If a part of the surplus, for instance Rs 10,000 crore, is allocated for the recapitalisation of PSU banks, then the multiplier effect of the credit, if well directed, could significantly support growth and strengthen bank balance sheet.
Indi-Ra expects a fall in global crude prices lately and robust growth in the collection of indirect taxes have raised the hope that the government finances will be in a better shape in FY16 than in FY15. Due to multiple factors which among other things include the growth slowdown in China, nuclear deal with Iran and strengthening of US dollar, the price of Indian crude basket declined to $42.97/bbl on 24 August 2015.
Given the geopolitical situation, it is likely to remain depressed in the near term. As a result, Ind-Ra's estimate shows a total savings of Rs 18,750 crore on oil subsidy for the government.
The agency also expects significant upside to the budgeted amount with respect to excise duty collection in FY16. This is mainly because of the increase in the excise duty on petroleum products between November 2014 and January 2015 and withdrawal of excise duty exemption on auto and other consumer durables from January 2015.
The excise duty collection grew by 81 per cent during 1QFY16 against the budgeted estimate of 21.7 per cent for FY16. Although such a high rate of growth in excise duty collection may not be possible throughout FY16, Ind-Ra's estimate shows that the government would be able to garner additional excise duty of Rs 53,300 crore in FY16.  Similarly, a higher dividend paid by the Reserve Bank of India (RBI) has given the government additional revenue of Rs 9,090 crore under the head 'dividend/surplus of RBI, nationalised banks and financial institutions'.
However, there are going to be few slippages as well. The most prominent one relates to disinvestment. The disinvestment target of the government has been budgeted at Rs 69,500 crore for FY16. The department of disinvestment, however, is hopeful of mobilising only Rs 30,000 crore this fiscal.
Ind-Ra believes the food subsidy may again overshoot the budgeted amount by Rs 4,480 crore in FY16. Although fertiliser subsidy for FY16 will fall short of the budgeted amount, Ind-Ra believes like FY15, the remaining amount due in this fiscal will be rolled over to FY17 to meet the budgetary target. 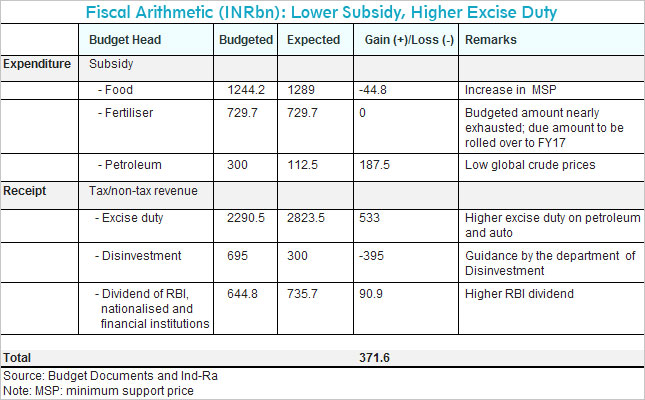