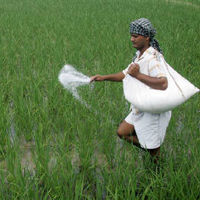 08 November, 2014
Print this article Font size -16+
In a move, calculated to help the government reduce its fertiliser subsidy bill, the Union Cabinet on 11 October decided to increase the prices of urea-based fertilisers by Rs 50 per tonne. Earlier, urea was priced at Rs 5,310 per tonne.

Concerned over rising subsidies, the finance ministry had asked the fertiliser ministry to expedite the proposal to hike urea prices last month. The government controls urea price and its distribution and pays heavy subsidy to producers to make sure farmers get the crop nutrient at a lower price.