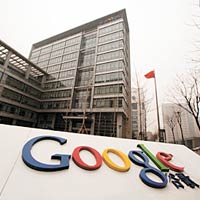 The market reaction put Google's stock within striking distance of $1,000, following what analysts said was a strong, but not spectacular quarter.

Shares of the world's No.1 Internet search engine jumped 8 per cent to $959.65 in after-hours trading on Thursday, 17 October, after it reported a 23 per cent rise in revenue from its Internet business, excluding fees paid to partners, of $10.8 billion in the third quarter.

"Expectations going into earnings were a little muted," said Needham & Co analyst Kerry Rice. "They did what they needed to do to impress investors."

Google's business, like rivals Facebook Inc and Yahoo Inc, has come under pressure as more consumers access its online services on mobile devices such as smartphones and tablets, where advertising rates are lower than on PCs.

The average cost-per-click - the price that marketers pay Google when consumers click on their ads - decreased 8 per cent during the third quarter, deepening the 6 per cent price erosion that Google experienced in the second quarter.

But the total amount of paid clicks increased 26 per cent year-on-year during the three months ended Sept. 30, the highest rate of growth in one year.

"Google's done a good job of being in the right place in mobile as it grows, and being able to monetise that," said Rice.

He also pointed to Google's 28 per cent revenue growth outside of the US and Britain as further signs of Google's strength.

Google's results offered a sharp contrast to online rival Yahoo Inc, which reported a slight dip in quarterly revenue on Tuesday and lowered its financial outlook.

No More Analyst Calls For Page
On Thursday, co-founder and CEO Page told analysts he will no longer be joining the company's quarterly earnings conference calls on a regular basis.

"I know you all would love to have me on, but you're also depending on me to ruthlessly prioritize my time for the benefit of the business," Page said, without providing further explanation for the change.

Page, who with Sergey Brin conceived of what is today the world's most-used Internet search engine, is not known for assiduously courting Wall Street investors. And this year, Page revealed that his vocal cords are partially paralysed as the result of a rare medical condition.

Needham & Co's Rice said he did not expect Page to be any less involved in running the company, noting that Amazon.com Inc's CEO Jeff Bezos does not participate in the quarterly earnings calls.

Excluding certain items, Google said it earned $10.74 per share, compared to the $10.34 that analysts were expecting, according to Thomson Reuters I/B/E/S.