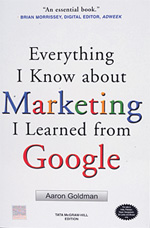 He makes some interesting connections, in a well arranged book, which if combined with the links to the website(s) that Goldman has also set up, might have a role in teaching the lessons of marketing to interested digital souls who are keen to learn it from and through Google. Take the brand development of Google, itself. As he illustrates this is an interesting method of understanding branding: a new word in any language needs acceptance in a society as well as a linking of that word (or label) to the concept. Google has made this connect with both acceptance and search early. Next, as with any brand, Google was able to get a large number of people to understand and associate the word with this idea. So Google moved from association to recognition. The final step however, was crucial to the development of the brand: Google became a noun (quite like, for the brand starved Indian consumer in the '60's where Cadbury was the word for chocolate) and then moved on to the ultimate association: Google becomes a verb. So we have 'did you google it?' and 'I googled to get the directions here ' becoming part of our language ( both the Oxford English Dictionary and the Merriam Webster Collegiate Dictionary added ' google ' to their wordlists in 2006).Amply illustrating , according to Goldman , the establishment of a brand in marketing, since becoming a verb allows 'us to do something with the things around us'.

The book does have some finer points in the narrative:examples are given on how SEO (Search Engine Optimization) is an important tool for marketeers; how the involvement of the user results in more attention and better reponse to advertising on the site; the book also chronicles how clicks work ; and Goldman also illustrates the use of the ' Four boxes of Branding' an interesting concept to understand brand personality. And a practical section on using the web and developing an online presence is well put forward.

However the bigger question, for me still remains: can Google really teach us marketing, say in the way , that P&G and Unilever taught marketing on the CPG market in the '60's or IBM and Microsoft taught marketing in the '80's and Apple continues to teach us today ? And the author glosses over some issues: a key one being the fact that 'Google ' (the brand ) has become 'google' (the web/ knowledge connector) does it risk going the way of Xerox or Asprin or Hoover? Isn't a smart marketing company one which defends its brand and not allow it to become generic? And at times Goldman comes through more like a star struck fan than a serious commentator. Google just can't seem to do anything wrong and 'The Google way' tends to sweep through everything (quite like the earlier ' GE way' a la Jack Welch).

In effect, though there seems to be no denying that Google /google (with or without the capital letter in front ) has been phenomenal in changing the way we seek knowledge and collect information. It's use goes across organisations (and individuals) in terms of size, expertise, areas and geographies. It has empowered people from the single individual to organisations to change the way things are done, spirited change and changed roles ( including that old chestnut: 'Information is power'). It has changed equations dramatically (one of Goldman's interviewees says that 'As a father, I've been replaced by Google', alluding to the trust and reliability, as well as probably the availability that his children see in Google).

But it is difficult to believe that Google will teach us marketing. Sure, it might teach us new ways and methods to work with the consumer. But beyond that looks difficult. But is the digital world, to which Goldman belongs (along with other younger consumers), different in approaching marketing. Is what was taught as marketing (before the net and Google) still relevant? Is the Google way upon us?
(This story was published in Businessworld Issue Dated 14-02-2011)