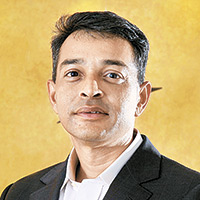 08 November, 2014
Print this article Font size -16+
I won’t be surprised if wealth managers in India begin to pop the bubbly. They have every reason to do so. Estimates put out by multiple surveys have predicted a near-explosion in the number of high net worth individuals (HNI), and a manifold increase in their wealth over the next few years. A BCG report forecast that private wealth will grow to $5 trillion from $2 trillion during 2013-18. The number of HNIs, too, is expected to rise to 219,000 by 2015-16, from an estimated 62,000 in 2010-11.

It must be mentioned here that these surveys were conducted in an environment that was, to say the least, difficult, with high inflation, interest rates, significant consumption reduction, and extremely pessimistic market sentiment. So, given the current uptick in investor sentiment, what are the expected changes in the wealth management industry? From Avendus’s perspective, let me illustrate a few, but before I do that, I would like to briefly explain a few basic models that most wealth firms operate with. These models essentially determine who these firms are, who they cater to, and what they offer.

A section of wealth management companies are ‘Loans Led’, which acquire and service clients mainly by their ability to lend quick and cheap, either on the basis of promoter balance sheets or against investment assets. Understandably, these companies did extremely well in the past few years, as access to debt was extremely difficult, and the promoter’s balance sheet had to be leveraged.

Another category of wealth firms is ‘NBFC Led’. These typically lend to promoters (of real estate companies, mainly) and, in turn, down-sell debentures to HNIs. The third model is ‘Advisory Led’, where wealth firms cater to their clients by offering advisory services. This segment, by far, has been the worst affected in the past few years, with many, including foreign bank-sponsored ones, forced to shut shop.

I would like to explain the last two models in greater detail, and elaborate on how these will emerge as the focus areas in the current times. The fourth model ‘Capital Markets Led’ is followed by the firms that are led by their capital market abilities, especially pertaining to research and fund management. After the drought of the years past, these companies will stand to benefit from the first wave of liquidity. In fact, in the run-up to the current rally during the past six months or so, these firms have done well, and will continue to do so till bull market sentiments continue.

The fifth model, favoured by some wealth firms, is ‘Investment Bank Led’. Here, the firms serve their client’s needs — on both personal and corporate levels — helping them not only raise funds, but also restructure and expand their businesses. Their services may also include re-structuring a client’s balance sheet and reducing debt (by selling assets or through raising funds in equity markets). This process leads to unlocking of valuation in the client’s equity holdings as well as credit upgrades in the bonds issued by these companies.

Boosted by value-unlocking and upgrades, a section of HNI clients is actively pursuing wealth advisors to help them find investment opportunities in startups. Stories of how early investors made astounding returns in WhatsApp, Bingo Bash, and redBus have fired up the imagination of HNIs. As a result, more and more HNIs now believe that such ‘wealth creation’ ideas need to be a part of their core asset allocation.

As a new trend, we also see family offices increasingly looking at value-accretive businesses, and even new ventures, especially related to technology, that could potentially be disruptive to their own traditional businesses. Investment in technology companies is, in fact, currently the buzzword among HNIs. This investor class is well aware of digitisation, the penetration of mobile phones, and how smartphones have changed the rules of interaction with and across the world. The understanding is fuelling the rush to invest in behind-the-scenes and currently-away-from-the-limelight technology startups that provide the services, and the plumbing to the big names in e-commerce (Snapdeal and Flipkart), classifieds (Quikr, OLX, Zomato), and travel (MakeMyTrip, Ibibo, redBus). Money is chasing IT companies catering to the social media analytics cloud (SMAC) space, digital advertisement companies and app developers.

Coming back to wealth firms, we definitely expect the ‘Investment Bank Led’ model to do even better in the next few years. We also foresee that in all cases and in all models, the first change will be an increase in the employee headcount. Primarily, there will be efforts to hire from ‘Investment Bank Led’ firms, as they are the prime people who can not only provide access to HNI clients, but also support the business development of the i-banking side of the firm. According to the BCG report, among wealth firms, as much as 35 per cent of revenue streams can come in from collaboration across business lines in Asia, excluding Japan.

Thus, in the next few years, we hope to see explosive growth in relevant wealth firms, a ballooning of salary levels, and the launch/re-launch of wealth management outfits. The latter would be, especially, true for those firms catering to the top of the pyramid.

Again, from the wealth management industry’s perspective, the big change expected over the near future will be the higher risk appetite of HNIs. This would essentially mean an increased allocation to equities to begin with, and then to alternative assets. In fact, during the next six months, as valuations run ahead of fundamentals in the public markets, there would be a likely shift towards co-investment opportunities and alternative assets, including in the private space, among private equity (PE) and angel funds. This, as a direct consequence, would lead to availability of risk capital to entrepreneurs at all stages — in the forms of angel, seed, venture capital and PE funding. This, we feel, would be a silver lining. Won’t it?

The author is chief executive officer of Avendus Wealth Management