Good Times, A Thing Of Past? 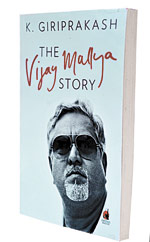 08 November, 2014
Print this article Font size -16+
Most of the literature on Vijay Mallya has so far highlighted his flamboyant lifestyle. But journalist K. Giriprakash seeks to portray Mallya in a different light in The Vijay Mallya Story — as a hard-trained son and a man of ideas. His father, Vittal Mallya, a contemporary of Dhirubhai Ambani in the 80s, was known for caring for his employees. Mallya, on the other hand, was different. He maintained a larger-than-life image and wanted to be seen that way. The book recalls how in 2003, after a chopper carrying Mallya crashed in Bagalkot in northern Karnataka, he kept his composure. The author says the fall of Kingfisher Airlines has really disturbed Mallya but it also shows his humane side. He argues that while the acquisition of Air Deccan and retention of its employees was a financial misjudgement, those decisions were dictated by humanitarian concerns. Kingfisher may have been Mallya’s biggest debacle, but the author is not writing off Mallya yet.