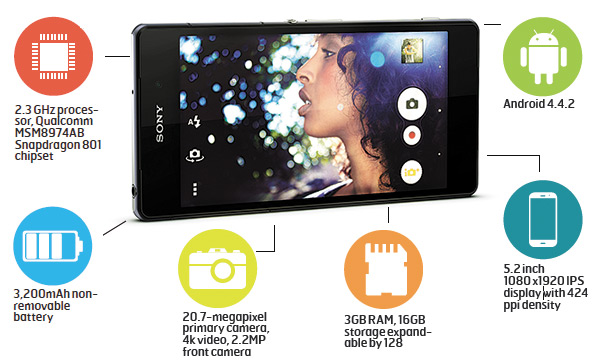 08 November, 2014
Print this article Font size -16+
Sony's xperia z2 is one of the three top smartphones fighting it out for your wallet at the moment, the others being the Galaxy S5 and the HTC One M8. You could also count the Lumia 1020, which is in a class by itself because of its special camera. And, of course, there’s the iPhone 5S which one won’t argue with — for now.

Someone seeing the Sony Z2 in my hand asked why the phone had two screens. And it’s true that with the display turned off it does look like the same back and front. Sandwiched on the sides is the metal, which is where all the buttons and flaps sit. In this department, the Sony Z2 looks different from other phones because all of its slots are behind flaps that keep it waterproof. With these securely shut you can actually take the phone underwater, in the shower, and through the rain. Sony has led the way with this waterproof business and it’s only more recently that others, including the Galaxy S5, have been featuring this sort of protection. The phone is also dust and scratch resistant.

Also different about some of the Sony phones including the Z2 is the little round power button and a dedicated camera button on the right edge. As ever, the design of this phone is all straight lines, totally recognisable as a Sony phone. “Omnibalance” they like to call it. Straight, straight, straight, is what I call it. It’s very much like the Z1 and unless you were to examine that with the Z2 by its side, it’s difficult to tell the difference. And that’s fine, as design has certainly not been a problem with any of the Xperia phones. There were other issues, and it seems Sony listened.

Definitely the best thing that Sony has refreshed in the Z2 is the screen which in its earlier version used to wash out at the slightest change of angle. This time, Sony has got it right as it gets on the path to catching up with others. The Galaxy S5 still has a more contrasting screen but the Z2’s 5.2-inch display is pretty good too. On the sound front, the HTC One M8 beats everyone else, though the Z2 has stereo sound and noise cancellation in the headphones. But considering it’s the maker of the Walkman, Sony should improve the sound on its handsets.

The Z2 works with a more powerful processor — the most recent — and has more RAM than the Z1 did. It works without a hitch though I did encounter some stutter when browsing. Sony’s interface is light, not interfering with the Android experience too much. And that experience is overall smooth. Its battery does well, not only because it’s large, but also because of the battery saving software, “Stamina mode”.

The camera can’t but be especially good on an expensive smartphone particularly from a company that makes cameras and has the expertise. The Z2’s camera is actually the same as the Z1’s except that something’s been done to get better pictures out of it. It’s still not a low-light specialist and I found that images shot outdoors would get noisy and blurred if a portion was in the shade. So don’t expect great results indoors. But in full daylight, photos were sharp and clear and detailed. There are several camera apps replete with options. The video shoots in 4k if you should find a need for that capability. There’s no optical image stabilisation. Let’s leave that for the Z3, shall we?