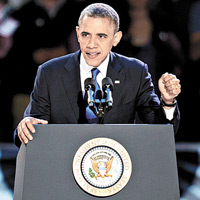 08 November, 2014
Print this article Font size -16+
Ever since us president Barack Obama’s India visit in 2010, he has been among the most popular international figures in this country. Even the political leadership of India perceives his re-election as good for our nation. For starters, Obama called for greater Indian participation in rebuilding Afghanistan. Even though it has not gone down well with Pakistan, the once close partner of the US in the region, Obama believes in a much bigger role for India in South Asia, but that may also be a continuation of the Bush-era policy of countering China, and not specific to Obama.

On the other side, Indian companies worry about a protectionist backlash against outsourcing that took shape in his first term; unemployment is still far too high for comfort in the US, and recent news about Germany’s slowing economy — it is Europe’s growth engine — will slow down the US revival even more. For us in India, four more years of Obama will be like the curate’s egg: good in parts.

Strictly Business
For the first time in nine years, the world’s largest fast food chain McDonald’s has reported a fall in its monthly samestore sales. This follows a fall in profits in the third quarter. Unemployment, higher prices and competition have effected the fall.