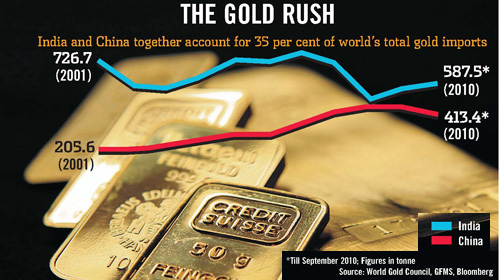 Last October when the Reserve Bank of India (RBI) bought 200 tonne of gold — as part of its foreign exchange reserves management — from the International Monetary Fund for Rs 31,490 crore, it might not have imagined that the investment would fetch a 35 per cent gain in just 14 months. As gold hit its all-time high of $1,430.95 per ounce (Rs 21,226 per 10 gm) on 7 December at the London Metal Exchange, the RBI got richer by around Rs 11,000 crore. Gold prices have surged over 30 per cent since the beginning of this year.

Let's see what is driving gold's bull run and if it will continue. For one, with uncertainty looming in the US and Euro zone, investors are finding gold a safe haven to balance their portfolios. "As long as developed nations are in troubled waters, demand for gold will continue," says Chirag Mehta, fund manager at Quantum AMC. "In recent times, gold has been a fantastic hedging tool and going ahead investment demand, especially from China, will keep the gold prices firm."

Secondly, central bankers, especially in the emerging market, are amassing gold to control appreciation in their currencies; that is pushing prices northwards. Central banks are buying gold off-market, but at the market prices. "The surge in gold prices comes as investors are looking for insurance against rising inflation and currency appreciation," says Alex K. Mathews, head of research at Geojit Financial Services.

Chinese, Russian and the Indian central banks have been the biggest buyers in the past two years — China's reserves have jumped by 75 per cent to 1,054 tonnes, while Russia's and India's reserves have risen by 34 per cent (to 664 tonne) and 55 per cent (to 558 tonne), respectively. But gold reserves as a percentage of total forex reserves have been low in China (1.5 per cent), Russia (5.3 per cent) and India (7.1 per cent) compared to some countries such as the US, France, Germany and Italy where gold accounts for 65-72 per cent of the total reserves.

Analysts say gold demand in China (the per capita consumption is 0.5 gm) will remain robust as the government is preparing to raise interest rates further to tackle inflation. So far in 2010, China's gold imports have crossed 413 tonne, compared to 202 tonne in 2002. In August, China also allowed more banks to import and export gold. Many expect China to overtake India as the biggest gold importer — it is already the world's largest producer.

Demand in India will remain buoyant, too. "The demand indicates bullishness and with no scrap gold in the market, price is expected to move up," says Anjani Sinha, MD and CEO of National Spot Exchange (see ‘The Gold Rush'). However, the pattern has shifted to investment demand as retail consumption is low due to high prices. "Investment demand's proportion to the total gold consumption has risen to 35 per cent from 20 per cent in 2007," says Sinha.

Geojit's Mathews says, "We are nowhere near a bubble. The yellow metal may correct, but the huge appetite will keep the prices firm. With no major sellers and uncertainty like the geo-political situation building up in south-east Asia and central Asia, there isn't any better investment option than gold. Therefore, even at $1,400 levels gold prices looks fairly valued."

Tushar Poddar, chief economist at Goldman Sachs, says the price could move even higher. "We are bullish and see prices scaling to $1,690 per ounce by 2011 end." The good news, though, for investors — it's a bad news for retail buyers — is that on an inflation-adjusted basis, price of gold is far from its 1980 peak of $2,300 per ounce, which means there is room for gold to touch new highs. Investors can follow what late British Clergyman Thomas Fuller once said: it would be much better to have your gold in the hand than in the heart.