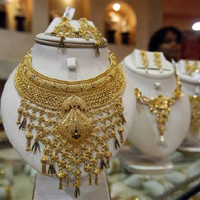 08 November, 2014
Print this article Font size -16+
Gold slipped on Thursday (20 February) as the dollar firmed after minutes from a US Federal Reserve policy meeting indicated support for continued tapering of its stimulus.

The tapering, which highlights a recovery in the US economy, will diminish gold's investment appeal as a hedge against inflation. The metal sank to a six-month low on December 31 on prospects for a global economic recovery.

"It's still rangebound for gold. It's broken a few tiers but at the moment, it's still capped within $1,330," said Brian Lan, managing director of GoldSilver Central Pte Ltd in Singapore.

"What we can see is that it should correct a little because the rise has been too sharp," said Lan, who pegged key support at $1,305 an ounce.

But dealers expected jewellers to buy on dips while India's plan to keep tax on gold imports at current levels could underpin sentiment in the physical market as it will lead to more smuggling.

Gold demand in India is expected to be robust in 2014 and likely to encourage an increase in smuggling if curbs on bullion imports remain, the World Gold Council has said.

Premiums for gold bars in Singapore were mostly steady from last week at $1.20-$1.50 an ounce to spot London prices. Dealers noted buying from jewellers in Indonesia, while Thailand sold some scraps to Singapore.

"I've got some light demand from Indonesia but it's more for factories and not for investment. Thailand has been quite slow since the beginning of last week," said a dealer in Singapore.

"Business in Thailand has been hit by the unrest. People are complaining."

A Thai court endorsed on Wednesday Prime Minister Yingluck Shinawatra's declaration of a state of emergency, a day after five people were killed in gunbattles in Bangkok, but warned the government not to use it to disperse peaceful protesters.

The protests are the latest instalment of an eight-year political battle broadly pitting the Bangkok middle class and royalist establishment against the mostly rural supporters of Yingluck and Thaksin.

In other markets, the dollar index recovered from this year's low of 79.927 reached on Wednesday against a basket of major currencies. It rebounded after the Fed minutes and was last trading at 80.078.

Asian stocks tumbled and the yen firmed as a survey painted a grim picture of China's manufacturing sector, heightening uncertainty about the outlook for the region's economic powerhouse.