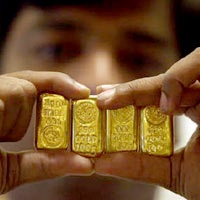 
Gold, which was considered as the safest asset during economic ups and downs, is now behaving like a risky asset and has slipped around 2.5 percent in the international markets. From strength in the DX to weak risk sentiments in the global markets, gold has reacted to all negative developments and slipped along with other risky assets. Currency factor is playing a key role in the performance of gold prices currently. While a stronger DX is leading to downside in international gold prices, in the Indian markets, a weaker Rupee is cushioning the decline in prices.

Silver prices slipped more than gold in the past fortnight as the white metal took cues from movement in gold and base metals. Economic concerns raised doubts over demand for the metal in the future.

Falling more than 7 per cent in the past fortnight, Nymex crude oil prices slipped below the $83/bbl mark as rising supply coupled with increased WTI inventories added downside pressure on prices. These factors along with the worsening macroeconomic scenario added to further pressure. OPEC production increased to an average 31.595 million barrels a day in May from 31.575 million barrels in April. The crude oil output is at highest level since October 2008.

Natural gas prices on the Nymex declined around 13.5 percent on the back of rising US natural gas inventories coupled with strength in the DX.


Movement in base metals is largely correlated with the situation on the global economic front. Slowing US and Chinese economy amid the rising European worries has led to increased fears of growth in demand for metals. In the past fortnight, all base metals ended in the red, with nickel losing around 4.3 percent, followed by copper and aluminum, which fell around 4 percent each. In the short-term downside pressure in base metals is expected to persist on account of dollar strengthening and weak investor sentiments.

Outlook
Pressure on precious metals is expected to continue in the short-term, with no clarity over European debt crisis along with weak investor appetite. Strength in the DX is also expected to continue, thus adding pressure on all dollar-denominated commodities. Base metals too are likely to see further downtrend in prices, until any measures over Greek are carried forward.

Supply increase in case of crude oil has come in as major negative factor for crude oil and during the week we expect the commodity to witness downside pressure. Other factors like macroeconomic concerns will also act as a negative factor.

Agri Commodities
Entire agri commodities witnessed down trend owing to lacklustre trades in the domestic markets and imposition of the staggered delivery mechanism in Futures. In a staggered delivery system, investors need to square off their position before the contract enters the tender period. For almost all the agri commodities the tender period for the contract is 5th of the month. Sharp fall was posted in Mentha Oil due to commencement of fresh arrivals in the domestic market. Prices in the Oilseed complex remained weak due to slow down in the demand for Soybean and better sowing prospects of U.S. Soybean. Spices also remained in red due to fragile overseas and domestic buying along with sufficient supplies of the same, Pepper being an exception. Ample supplies of sugar in the domestic and overseas market led Sugar prices to settle in the red.


Among Spices, Turmeric posted sharp losses of 12% followed by jeera and Black Pepper to around 6.4% and 4.3% respectively while Red Chilli settled mildly higher by around 1%. Slow procurement from the government as well as from the overseas buyers led turmeric prices to plunge. Fragile demand and ample supplies in the domestic markets is expected to keep prices weak in the short term. Black pepper prices are likely to remain subdued due to fragile overseas demand while jeera prices might witness a bounce back on account of expectation of demand from the overseas buyers eyeing lower crop in Syria and Turkey.

Chana settled lower by 3.7% on account of better area covered under Kharif pulses and fears of government intervention to curb rising prices. The area covered under summer pulses crops so far is 15.1 lakh ha, up 10.2% from last week.
Chana prices are likely to trade sideways to down due to lacklustre trades at the domestic market. However, lower output may cushion prices.

Kapas continued to trade bearish tracking heavy sell off in the global cotton prices eyeing 43 percent rise in the global ending stocks this year. However, lower end stocks in the domestic markets may support Kapas prices in the coming fortnight.

Sugar extended losses in the domestic as well as international markets on account of abundant sugar supplies. According to ISMA, Sugar output between October 1, 2011 to May 31, 2012 stood at 25.5 mln tn a rise of 8%. Prices in the short term are likely to continue to trade in a bearish tone.


Edible oil complex continued to trade in the negative zone due to slow down in the exports of Soybean from U.S due to weak global economic recovery and better sowing prospects of the Soybean in U.S. Soybean and Mustard fell by around 3% while Refined Soyoil fell by 2.6%. With possible onset of the monsoon in Kerala shortly, sowing of Kharif Oilseeds which has commenced in the some parts will be augmented due to better returns earned by the farmers this year particularly Soybean.

Outlook
In the coming fortnight, most of the agri commodities are likely to track onset of south west monsoon and thereby advancement of same into the interior parts of India. Declaration of the MSP for the Kharif crop in the month of June and there by the sowing progress of the summer crops would also determine prices particularly for Cotton, Soybean and Pulses etc.