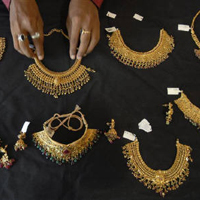 Natural gas prices on the Nymex rose around 6.5 per cent on the back of less than expected rise in US natural gas inventories coupled with weakness in the DX.

The base metals pack traded on a positive note except Aluminum. Copper, the leader of the base metals group gained more than 1 percent on account of positive market sentiments coupled with weakness in the DX. However, further upside in red metal prices was restricted on the back of rise in LME Copper inventories around 8 percent from 230,875 tonnes on 1st June'12 to 249,450 tonnes as on 15th June 2012.

Outlook
Precious metals, Base metals and Crude oil prices are expected to trade on a positive note on the back of expectations of quantitative easing from the US Federal reserve to boost the global economy which is hurt by the European debt crisis along with slowdown in Chinese economy. Further, in the Indian markets, prices may also find an upside support on expectations of repo rate cut by the Reserve bank of India, in its monetary policy meet, scheduled on Monday, June 18, 2012.

Crude oil prices will further get support as demand is expected to rise in the near future.

Agri Commodities
The southwest monsoon that accounts for nearly 74 - 75 per cent of the countries total rainfall and have a strong hold on the country's agricultural output, has finally arrived in the country during the first week of June. However, the progress has been very slow and thus rainfall is 42 per cent below normal during 1-13 June as per the met department. Further, considering the higher input cost, government has made a significant hike in MSP of Kharif crops, to boost sowing. Last fortnight also witnessed reduction in the special cash margin on soybean, Ref soy oil, Chana and pepper as the prices have taken downside correction in the past few weeks. Taking cues from the above mentioned factor, agri commodities witnessed a sharp rebound except CPO and Chana that witnessed 4.2 per cent and 3.2 per cent fall during the last fortnight.

Among spices, turmeric posted highest gains of around 4.7 per cent on expectation of lower acreage covered under the spice this season, While Jeera settled 2.4 per cent higher anticipating fresh export enquiries. Limited stocks with stockiest led pepper prices to increase by 3.4 per cent, however, sharp gains may be capped due to fragile demand from the overseas markets. Delay in monsoon and expectation of lower area under Turmeric may continue to support Turmeric prices, while export enquiries may continue to keep sentiments upbeat for Jeera.

Chana prices which declined in the first week of June on reports of higher sowing of summer Pulses however, rebounded in the last week on account of slow progress monsoon and thereby apprehension with respect to Kharif Pulses acreage. Further, with an improvement in demand at lower levels, prices may continue to remain firm in the coming fortnight.

Domestic Kapas prices that had declined in the month of May amid sharp fall in the global cotton markets recovered during the last fortnight and settled 5.5% higher on expectations of lower sowing amid shift in acreage and slow advancement of monsoon. Despite a 28% hike in MSP of medium staple cotton, area may remain lower as farmers may shift to other remunerative crops supporting the upside in the prices.

Sugar prices gained around 2 per cent on worries over slow progress of monsoon in the domestic markets coupled with recovery in the international sugar markets amidst concerns of lower cane yield in Brazil. Higher acreage failed to pressurize prices as ultimate output would depend on the yield.

Under edible oil complex, mixed sentiments prevailed with Soybean and Ref soy oil gaining 2.1 per cent and 0.1 per cent eyeing slow monsoon advancement that may affect soybean sowing and thereby output, while CPO prices fell by around 4.3 per cent on expectations that the Malaysian palm oil production would increase in the coming months following the seasonal pattern and lower demand amidst global economic turmoil.

Outlook
The agri commodities, particularly, soybean, Cotton, Sugar and Turmeric may continue to remain firm on account of below normal rains so far in the monsoon season which may hamper sowing or growth of these crops. Chana prices may also rise if Kharif pulses acreage decline sharply due to below normal rains. However, sentiments may turn otherwise and prices could come under downside pressure, in case further advancement of monsoon is timely and well-distributed across the country.  Thus, the progress has to be watched closely in the coming weeks to get a clearer picture of the crop prospects for the coming season of 2012-13.

(The author is Associate Director, Commodities and Currencies, Angel Commodities)