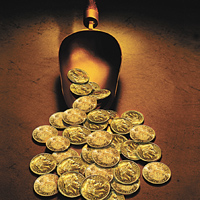 08 November, 2014
Print this article Font size -16+
Gold prices have probably peaked this year and could sink to their lowest since 2010 at $1,100 an ounce as the US economic recovery gathers pace, consultancy Metals Focus said on Wednesday.
Weakness is likely to set in after an impressive start to the year, it said, when gold rallied to six-month highs. But a replay of last year's 28 per cent plunge, triggered by the U.S. Federal Reserve's tapering of extraordinary stimulus measures, is not on the cards.
The consultancy also forecast that an eventual easing of tensions in Ukraine would add to a bearish trajectory for the market.
"In the short term, the U.S. recovery regaining momentum (thanks to improving weather conditions) and the eventual de-escalation in Ukraine are likely catalysts for lower prices," it said in its Gold and Silver Mining Focus 2014.
"Meanwhile, the Fed's ongoing reduction in its bond purchases, easing concerns about fiscal situations on both sides of the Atlantic and low inflation are all headwinds for the yellow metal for the rest of 2014."
Robust demand from the major physical gold markets in Asia should help offset Western investors' lingering caution in gold futures, derivatives and exchange-traded funds.
Chinese demand, which surged last year as prices fell, will remain strong, it said, though below the 2013 level. That, along with strength in retail demand in Western markets, helped drive a 35 percent surge in physical investment last year to 47.1 million ounces.
Jewellery consumption also rose 22 percent to 81.7 million ounces, while the volume of scrap gold returned to the market fell 26 percent to 39.3 million ounces.
That helped offset a 5 percent rise in output from gold mines to 96.7 million ounces, resulting in a 21.8 tonne structural deficit in the market last year, Metals Focus said.
That does not include outflows from bullion-backed exchange-traded funds (ETFs), however, which according to Reuters data totalled 26.354 million ounces last year. The strength of ETF outflows was a major weight on prices in 2013.
"Given plenty of above-ground inventory, other than a temporary shortage of kilobars in Q2, the gold market remained well supplied last year," Metals Focus said. "Moreover, it is of note that 'Western' investors tend to set the price, while physical markets react to it."
The consultancy expects silver prices to average just under $20 an ounce this year, not far from current levels but well below last year's average of around $23.80 an ounce, as its fundamentals weaken.
"Global supply is expected to rise by around 2 percent, compared with a 4 percent drop in world silver demand," it said. "The most significant change ... is expected in physical investment, which is forecast to drop 11 percent."