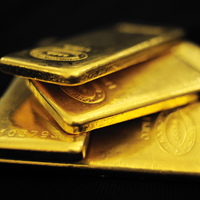 08 November, 2014
Print this article Font size -16+
Gold reversed early gains on 25 June' 2013 as worries persisted over an early end to US monetary stimulus measures and a cash crunch in China, bringing the metal's losses to more than 8 per cent since the start of last week.
Bullion had edged higher earlier in the Asian trading session after two top US Federal Reserve officials downplayed an imminent end to monetary stimulus. But a lack of strong buying interest and continued uncertainty pulled prices down.
"There is a lot of uncertainty in the markets. People are waiting for prices to stabilize before buying," said a trader in Hong Kong.
Gold prices have taken a beating since Fed Chairman Ben Bernanke gave his most explicit signal yet last week that the central bank was considering scaling back an $85-billion-a-month bond purchase programme.
The precious metal has benefited in the past few years as it was seen as a hedge against the Fed's inflation-inducing policies.
Minneapolis Fed President Narayana Kocherlakota said on Monday investors were wrong to view the central bank as having become more keen to tighten policy, while another official said the bank would be running an accommodative policy even if it dialled back stimulus this year.
Spot gold fell 0.04 per cent to $1,280.84 an ounce by 0704 GMT after rising to a session-high of $1,288.16 earlier. Comex gold rose $3.50 to $1,280.60, not far from near three-year lows hit last week.
"Price-sensitive buyers may wait for a well-defined bottom before entering the market," HSBC analysts wrote in a note, suggesting that the big drop in prices over the last six sessions has not been enough to woo buyers.
HSBC on Monday cut its gold price forecast for 2013 and 2014, citing the Fed's wind-down plan and weak growth prospects in China. Credit Suisse also cut its forecast on Tuesday.
Shanghai gold futures fell 0.3 per cent on Tuesday, indicating soft demand in the second-biggest bullion buyer after India.
Chinese stocks extended losses even as money market rates fell back towards more normal level as the central bank signalled a slight softening in its crackdown on easy credit by opting not to change the amount of cash in the market.
A slowdown in China could inflict another blow to gold, which has seen a falling off in demand in India, where the government is trying to curb gold imports to reduce its current account deficit.
Holdings in SPDR Gold Trust, the world's largest gold-backed exchange-traded fund, fell 0.43 per cent to 985.73 tonnes on Monday - its lowest in over four years.