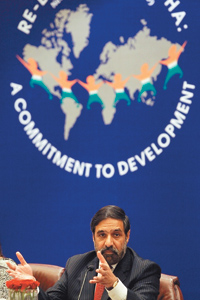 Though it is the same government, with the same economist Prime Minister, there is a new minister of commerce. His predecessor, Kamal Nath, ranted and raved, cried copious tears for the absent Indian farmer, and after enjoying hospitality in the world's best resorts for four years, broke up the negotiations on the Doha Round in July last year. Restarting them was impossible with him at the helm, for he no longer had credibility with other nations. So the Prime Minister has sent him off to highways, and brought in a new, more circumspect man. Since no one who had watched Kamal Nath would think of inviting India, it was India this time that invited trade representatives of 20 nations to Delhi. Knowing India's tendency to throw tantrums — politely known as sensitivity — they made sugary noises about the meeting being an important step towards a great future.

As Rahul Khullar, commerce secretary, correctly pointed out, this meeting was not about negotiations but about how to conduct the negotiations — modalities, to use negotiators' jargon. But the structure of international trade talks is well established from 50 years' experience: there must be a broad variety of issues, and negotiations must proceed in separate working groups on all the issues, leaving scope for compromises across the issues in a general meeting. The years that have gone by without negotiations will have led to the accumulation of issues and grievances on all sides. For instance, European governments display rabid prejudice against India and Indians: they stop and maltreat Indian travellers, and they stop Indian drugs being exported to Africa. Their arbitrariness can only be restrained through an understanding between their and our governments.

This example also shows why Kamal Nath's reading would be quite out of date today. To him, the whole point of going into a trade round was to get concessions for India without giving anything. He wanted the US and the EU to open themselves to Indian goods and services; but he was unwilling to negotiate on India's high level of agricultural protection. Anand Sharma sticks to this line, but it is a non-starter. India is a large and growing market, and there is a point in going into negotiations only if we are prepared to trade access to our market for concessions we want abroad.

In fairness to ministers, their secretaries are even more unreasonable than they. Although the Indian economy underwent some reforms, Indian bureaucrats underwent none. In the old days of socialist self-sufficiency, they had developed a knack for taking the US position and championing its opposite in interminable speeches. Their successors know this one trick well, and fall into it almost unconsciously.

This is not the only reason why the political establishment needs to give some thought to our negotiating stance. Kamal Nath was so unreasonable about agriculture because our agricultural policies are complex, ad hoc, soaked in politics and impossible to change. In the belief that we are thereby helping farmers, the government subsidises agricultural inputs — canal water, fertilisers, pesticides — and has made investments in them uneconomic. It fixes high prices for agricultural products, but buys mostly wheat and rice; it has thus induced farmers to divert enormous acreages of unsuitable land to the production of these two foodgrains, and reduced the diversity of our agriculture. By raising the prices paid to farmers, it has made foodgrains too expensive, so it subsidises their sale to consumers — but only to the so-called poor. It has thereby encouraged enormous dishonesty; it has made many ordinary citizens claim to be poor, and led many traders to siphon off grains meant for the poor and sell them in the open market for ten times the price.

Just how badly our policies work is being demonstrated by sugar, whose market price is climbing towards Rs 40 a kilo. This is in a country that claims to have beaten Brazil and become the world's largest producer. The government gives sugar to its privileged ration card holders cheap, but it does not want to spend on the subsidy. So it forces sugar producers to finance it by buying off their sugar at a low price. To stop them from going bankrupt because of this robbery, it lets them sell the rest of their sugar in the open market, and ensures that market prices are high enough to make it worth their while. It makes them hold stocks, but manages the stocks itself — so badly that it has either too much or too little. If a new trade round makes it abandon some of its stupidities, let it be soon!