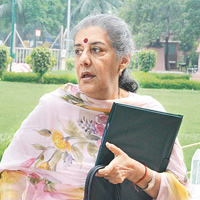 "Despite all the cynicism, things are finally moving. Digitisation will enhance the returns for MSOs as well as broadcasters," says Ashok Mansukhani, who represents the MSO Alliance. Media stocks, including Hathway, Den and Wire & Wireless, that have been languishing for some time, jumped 5-15 per cent after the decision. Tata Sky CEO Harit Nagpal says digitisation will help the industry reorganise and deliver better subscription figures. For cash-strapped MSOs, the decision may mean investments. The government has also put out the carrot of bringing cable television on par with the telecom sector with FDI at 74 per cent (from 49 per cent) if it digitises. Ending analogue frequencies will also free up spectrum.

But there is many a slip betwixt the cup and the lip. "Millions of set-top boxes will have to be imported from China and Korea. How will the industry drum up Rs 25,000 crore by March next year?" says Ravi Singh, president of Mumbai's Cable Operators' Association. He told BW that though his operators were not against digitisation, they are planning a national campaign to demand the Ordinance's deferment.

Mansukhani, who is also a member of Trai's consultative committee, agrees there may be a delay. "Implementation of a digital universe in 90 million homes is not a joke. It is a huge technical task. Billing, call centres and conditional access systems (CAS) have to be put in place. Fiscal and tax incentives have to be worked out. It may even go on to 30 September next year."

This is not the first attempt at digitisation. In 2002, CAS was notified for introduction by September 2003 for four metros. In December 2007, Trai again finalised a 55-city rollout. Both attempts failed. This time round, Soni appears to be determined. We will have to wait and watch.