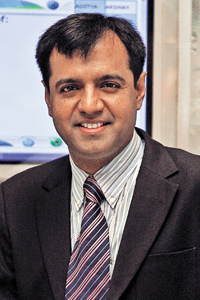 08 November, 2014
Print this article Font size -16+
Education is ‘in' these days, with companies, entrepreneurs and even politicians taking to it in a big way. But Shantanu Prakash, 45, had seen the opportu-nity way back in 1994, when it was not fashionable to do so. An IIM-Ahmedabad alumni, Prakash is the founder of India's biggest education solutions provider, Educomp Solutions. He uses technology to aid education — providing digital content to schools, for instance. In the process, he has also created a lot of wealth for his investors. In fact, the returns last fiscal have helped Prakash emerge as India's most ‘value'able CEO (one-year performance) in the small companies category.

Analysts, too, are positive about the company. Mumbai-based Angel Broking expects Educomp to record a compounded annual growth rate (CAGR) of 44 per cent and 27 per cent in topline and bottom line, respectively, over FY2010-12. Revenues could grow to Rs 1,553 crore in FY11, according to Angel Broking.

Educomp has aggressive expansion plans. Besides expanding SmartClass, it is investing in setting up K-12 (KG to Class 12) schools. Revenue from this vertical was up 60.5 per cent in FY10. Test preparation is another thrust area. In August, Educomp bought a strategic stake in Vidyamandir Classes for Rs 34 crore. In higher education, it has joined hands with London-based Pearson and Singapore's Raffles Education Corporation.

Educomp also has a presence in international markets such as the US and Canada. It has signed an agreement with China Distance Education Holdings to distribute Educomp's products. But India remains its biggest market, accounting for 90 per cent of total revenues. "We believe that international revenues, while they grow around 30-35 per cent year on year, will continue to contribute about 10 per cent of our overall sales," says Prakash.

He seems to be following what inspiring US educator Marva Collins once said: "The essence of teaching is to make learning contagious, to have one idea spark another."