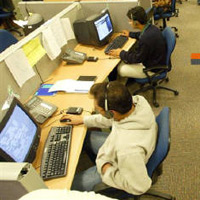 08 November, 2014
Print this article Font size -16+
Global IT spending is expected to pick up pace this year and grow 3.1 per cent to touch $3.77 trillion on the back of higher enterprise software and device sales, according to research firm Gartner.

Enterprise software spending growth is expected to be the strongest at 6.8 per cent to touch $320 billion by 2014-end.

Spending on devices such as PCs, ultramobiles, mobile phones and tablets, which contracted 1.2 per cent in 2013, is expected to increase 4.3 per cent to $697 billion.

Convergence of the PC, ultramobiles (including tablets) and mobile phone segments, as well as erosion of margins, will take place as differentiation will soon be based primarily on price instead of the task-orientation of devices, Gartner said.

Spending on IT services is expected to grow 4.5 per cent to $963 billion, while on data centre systems, it is projected to touch $143 billion, up 2.6 per cent.

(PTI)
Tags assigned to this article:
news 8 it gartner global it