Global 4G/LTE Divide Will Be Wide In 2019: Ericsson Report 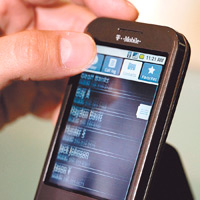 In 2019, LTE population coverage in Europe will be around 80 per cent, but Europe will only see LTE subscription penetration of 30 per cent compared to 85 percent in North America the same year. Even within Europe there will be large differences between Western Europe and Central and Eastern Europe. Population coverage for LTE in North East Asia is expected to be 95 percent by 2019, with LTE penetration levels at 45 percent. By the same year, China is expected to reach over 700 million LTE subscriptions, representing more than 25 percent of total global subscriptions for LTE.

IndusInd Bank Launches Video Branch
IndusInd Bank has launched a new customer-centric service titled Video Branch. This innovative offering enables the customers to do a video conference with the bank staff. They can schedule a Video call with the branch managers/relationship mangers or connect to the central Video Branch instantly.

This is first of its kind initiative in the banking industry which facilitates customers to interact with the Video Branch at their own convenience either from his desktop/laptop computers or Apple and Android smart phones. This facility will be available to all existing and new customers of IndusInd Bank.

Commenting on the development, Mr Sumant Kathpalia, Head – Consumer Banking, IndusInd Bank said, “In a move to digitise the banking experience for all customers, IndusInd Bank Video Branch is a 24x7 unique innovative service allowing customers to interact face-to-face with their bank branch using their desktop, tablet or smart phone. IndusInd Bank customers can now do all the transactions they do at a bank branch without going to it, right from the comfort of their office or home using the Video Branch App."

Webbzer.com, 60 Seconds Website Builder
Webbzer, India’s first responsive website builder company announced its official launch today along with its unique feature of making Website in “60 seconds”. The company has been developed specifically to counter the problems, small businesses face while creating a website for their business & allow them to come online with ease and in a cost effective manner.

It is the simplest & quickest, as per company said, online tool for people to make and maintain their websites. It also solves the problem of getting a website that will work on all electronic devices (desktop/laptop/tablet/mobile). This eliminates the need for extensive software knowledge that is required to create a website. The company also provides hosting and security and a free (.in) domain for the websites created using Webbzer.com.

DEN Networks Join Hands Wipro To Managed Services
Wipro Limited, an information technology, consulting, and outsourcing company, today announced a strategic partnership with DEN Networks Limited, a leading Indian cable distribution company, to revolutionise customer experience for the Cable and Broadband businesses of DEN networks. The alliance will help in accelerating DEN Networks’ evolution from being a B2B organisation, to a B2C organisation.

The partnership is aimed at empowering DEN Networks’ customers with seamless connectivity and integration. Through this decade-long alliance, DEN Networks will be able to provide its customers, Local Cable Operators (LCOs) and, thereby ensuring continuous engagement and zero downtime. The initiative will also help DEN Networks to streamline the deployment of its next generation services and provide quicker service activation, accurate rating and billing, and excellent customer service.

This agreement will allow DEN Networks’ to offer SMS and BSS user friendly solutions that will allow cable operators to deliver more personalized and sophisticated services to cable and broadband subscribers at sharply improved delivery time.

Including new big data applications, an enriched, carrier-grade Insight platform and data science as a service (DSaaS), Amdocs portfolio will enable service providers to better harness their data assets and improve the customer experience. The announcement builds on Amdocs TeraScale , Amdocs Proactive Care and our industry focused BI and Data Warehousing Services, as well as leveraging the company’s recent network optimization acquisitions, Actix and Celcite, to extend its big data reach into the network.

2014 Gender-GEDI Results
Dell on Tuesday (03 June) has announced the results of the second annual Gender-Global Entrepreneurship and Development Index (GEDI), revealing that more than 75 per cent of countries surveyed are not meeting the most fundamental conditions required for female entrepreneurs to prosper.

Among the 17 countries included in both the 2013 and 2014 Gender-GEDI reports, four increased their rankings, including India and Japan in APJ, while four showed a decline (Malaysia, Egypt, Mexico and Morocco), and the others ranked comparatively both years.

“At Dell, we are committed to empowering people everywhere with technology solutions to fulfill their ambitions and reach their full potential,” said Karen Quintos, senior vice president and chief marketing officer, Dell. “The Gender-GEDI Index provides key insights designed to help countries advance female entrepreneurship and ultimately bolster the global economy. We believe awareness of the current landscape for women entrepreneurship is the first step toward change.”

Akoya Drive to be Most Expansive Shopping Experience in Dubai
Luxury real estate developer, DAMAC Properties has announced the development of AKOYA Drive, one of the longest shopping strip experiences in Dubai.

The strip will house an outdoor ice-skating rink, cinema screen and interactive kids play area. The area will be longer than 13 football pitches end to end, and create a vibrant focal point for the residents of AKOYA by DAMAC and the surrounding area. More than 80,000 people will live within 16 km of AKOYA Drive by the time is completed.

"Akoya Drive is what everyone in Dubai has been waiting for,” said Niall McLoughlin, Senior Vice President, DAMAC Properties. “We expect Akoya Drive to be the new place to meet friends, entertain and get away from it all. This new haute spot with shopping, dining and entertainment will provide a real central point for those living in Arabian Ranches, through Motor City, Jumeirah Village and the surrounding areas.”

The rising confidence and purchasing power in Dubai has resulted in more demand for premium brands and with the large primary malls largely full, there has been a growing demand for the street shopping experience.

Aptech, Finalists Of Microsoft’s ‘Learning Partner Of The Year 2014’ Award
Aptech Limited, a global leader in learning solutions, announced that it has been selected by Microsoft as a finalist for ‘World Wide Learning Partner of the Year Award – 2014’.  Of the 3000+ entries for Partner of the Year Awards, Aptech’ exceptional work clearly stood out to the jury. Aptech is the only Indian partner to have been recognized as an outstanding learning partner by Microsoft.

This campaign ‘Techno Minds - Power Your Future’, was focused on popularising the potential of the new opportunity in the area of App development amongst the student community and  current developers; Aptech worked together with Microsoft aggressively in the Indian market to tap the huge opportunity to fill the gap of skilled manpower in the growing area of App development.

Accenture Calls For Nominations For Third ‘Innovation Jockeys’ Contest
Accenture, in partnership with Yahoo India, opened registration for the third season of Innovation Jockeys: The Hunt for India’s most Innovative Minds. Undergraduate, graduate and post graduate students across India are welcome to submit innovative ideas for using technology to transform India.

This year’s contest, which will focus on disruptive technology innovations related to the themes Internet of Things and Digital Government, aims to discover bright, young, home-grown innovators – and encourage them to take responsibility for driving significant change.

“We’re looking for India’s next generation of innovators – young people with drive, passion and creativity who will make a difference in the way businesses and society function,” said Sanjeev Vohra, Managing Director, Technology Platforms, Accenture India. “In the previous two seasons, the program drew a record 5,900 idea submissions from over 520 campuses and more than 70,000 newsletter sign-ups from students at 1,000 colleges across India. This year we are expecting even more students to come forward and showcase their solutions.”

IFES World Summit Concludes With New Opportunities In Indian Exhibition Industry
IFES, International Federation of Exhibition and Event Services, a world body of more than 40 member countries hosted its annual IFES World Summit 2014 from 31 May-1 June in New Delhi. It was for the first time that the World Summit was held in India.

The IFES mission is to create a stronger understanding about tradeshow marketing or exhibition marketing on a world scale through networking and sharing knowledge. Firsthand experiences are a most powerful learning tool.This year’s learning experience location was India. The World Summit successfully attracted participants and members from across the world. It created a platform of interaction with local as well as international key decision makers from the exhibition service industry.