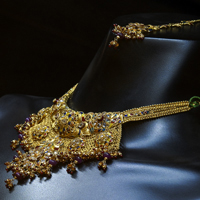 08 November, 2014
Print this article Font size -16+
Gitanjali Gems falls 9.99 per cent, hitting its daily lower limit for a third consecutive day, on fears the government will unveil more curbs to stall the supply of gold.
The three-day fall has wiped out 19.54 billion rupees, or half of its market capitalisation, as India looks to curb gold imports to improve a current account deficit that hit a record high in the October-December quarter.
India has raised import duties on gold to 8 per cent, but the central bank moves to tackle supply, such as making jewellers pay for gold up front, have had more impact.
Gitanjali said on 26 June' 2013 the company plans to increase diamond jewellery sales for offsetting the potential decline in sales from low margin gold jewellery, which accounted for 25-30 per cent of total revenues.
"Although this change in category mix will have impact on sales, the margins are expected to not only remain intact but also be better than estimates," Gitanjali said, referring to the plans to increase diamond jewellery sales.