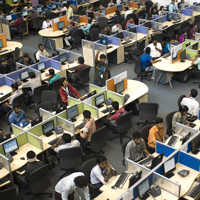 Is this turning out to be a case of a storm after a lull? A Businessworld analysis of corporate results data for 2,368 companies for the third quarter (Q3) ending December of this financial year indicates that India Inc. may be coming out of the woods, finally. And that is acting as a confidence booster for companies as well as their promoters as the composite numbers show.

The most heartening indicator, of course, is the strong bottom line, which heralds a phase of lean and mean operations. While the Q3 of fiscal 2008-09 showed a 34.2 per cent drop in net profit growth over the corresponding quarter of 2007-08, Q3 of 2009-10 has reported an astounding 47.7 per cent growth. “Businesses have become sturdy,” says Parag Parikh, chairman of Mumbai-based Parag Parikh Securities.
This, though, would not have been possible but for an improving top line, which has grown by over 13.3 per cent in Q3 as against 12.6 per cent in the same quarter the previous year.
But, importantly, if the net profit growth looks so strong, it is because corporate India really tightened its belt during the global financial crisis and the economic slowdown witnessed in the domestic economy.
For one, it slashed its expenses. In Q3 of 2008-09, total expenses for these 2,368 companies had actually grown (15.6 per cent) at a rate faster than the growth of its top line (12.6 per cent). But by Q3 of 2009-10, those had been cut to a more judicious 11 per cent, even as the top line grew 13.3 per cent. Its immediate impact was a healthy operating profit growth of 27 per cent while in the same quarter the previous fiscal operating profit growth was negative.
Click here for enlarged view
And while the companies were facing a tight economic situation, several of them have either paid off their loans or refinanced their high-interest loans to lower interest rates. That reflects very well in the total interest payout which fell 7 per cent from Rs 87,052 crore in Q3 of 2008-09 to Rs 80,950 crore in the same quarter this fiscal. In the same quarter in the previous fiscal, interest payout had actually grown 40.9 per cent because the companies were totally caught unawares by the global recession and its impact on the domestic economy.
As companies gained in confidence in the previous quarter, promoters have been emboldened to bring in fresh equity into their businesses as equity capital growth improved to 5.2 per cent against 4.2 per cent in the same quarter in the previous fiscal. And while tax payout had fallen by 34 per cent in Q3 of last fiscal, this year it rose nearly 50 per cent in the last quarter. The rise in depreciation from 16.7 per cent to 27.1 per cent is also an indicator that investment in assets has begun all over again for which the previous quarter may have been the defining moment.
But the most curious result that this analysis has thrown up is a 14.6 per cent drop in ‘Other Income’ when it had actually grown 13.8 per cent in Q3 of 2008-09. There are two ways of looking at this. First is the base effect argument, which suggests that the base in the past year was already very high and may be it has come to a more realistic level now.
The second is that the liquidity crunch around the world hit the mergers and acquisition activity which deprived many companies of profit from sale of assets. Sale of assets in distress, of course, is a different matter. Parikh, however, believes in the former theory. “Last time, they may have declared income (which did not materialise this quarter),” he says.
What nobody disputes, though, is a resurgence in sentiment. And to India Inc. and its well wishers, nothing matters more than that.
The sentiments are reflecting on the Bombay Stock Exchange’s Sensex, which is trading around the 16,000 mark, though it has witnessed some high volatility and a recent dip in the past fortnight.
(This story was published in Businessworld Issue Dated 15-02-2010)
Tags assigned to this article:
magazine rajeev dubey bse company results
sentifi.com