Getting The Write Stuff 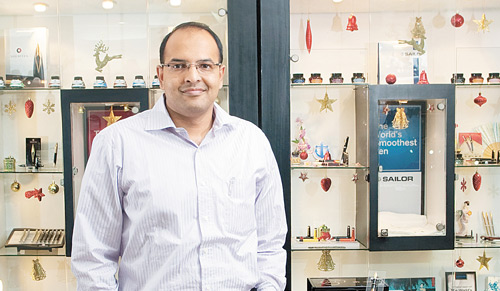 Few people will spend Rs 5,000 on a writing instrument of everyday use. Which begs several questions: can selling such pens be a profitable business? What value do such expensive pens provide? Who buys a pen just for the novelty effect? And finally, is it really worth it?

"India is emerging as one of the fastest-growing countries for luxury goods, and could become the third-largest market in five years," says Ranjan. The market is growing at 15-20 per cent. "That's a lot of opportunities in different segments, pens being among them." His is the first exclusive retail chain, he adds, and has the first-mover advantage.

That advantage may be short-lived. Other standalone stores such as Hyderabad-based newspaper Deccan Chronicle's venture Editions — Pens of the World, are moving in. Launched in 2010, Editions have opened four stores so far in Delhi, Mumbai, Hyderabad and Bangalore.

Then, there are the shop-in-shop outlets for high-end pens in retailers like Shoppers Stop and Crossword bookstores, among others. Players such as Emonte, a franchise of diamond retailer Gitanjali Gems, add to the competition.

That doesn't faze Ranjan, who plans to open five more stores in the next 18-24 months. The chain's revenue was Rs 45 crore in FY2011, and in the first eight months of this year, they are already at Rs 56 crore. Same store sales have been growing at 15-20 per cent in the past three years, says Ranjan. "We aim to be a Rs 100-crore company three years from now," he adds.

Brands such as Sheaffer and Cross have become a popular gift item. Some of Ranjan's confidence may stem from the growth in sales through corporate gifting, which account for about 45 per cent of William Penn's revenue. But those sales are likely to be, for instance, at the lower end of the price spectrum, not of the limited edition Caran d'Ache Balaji pen, designed by Swiss jewellery designer Edouard Jud, that retailed at Rs 2.5-3 lakh.

The pen's body is in an external silver cage that carries the image of Lord Balaji, whose image is also engraved on the silver clip; it is a part of series of limited edition pens that include Ganesha (estimated retail price at Rs 1.5 lakh), Buddha and Shiva. Ranjan claims they sold well.

Pens That Cost A Fortune
In selling luxury, location is everything, and location does not come cheap when they have to be in luxury malls. Ranjan's stores are small, just 800-900 sq. ft, and need an investment of about Rs 1 crore each. "Sixty per cent of that investment is in inventory and 40 per cent in rental, infrastructure and personnel costs," he says.

He is also banking on the desire for novelty among the young. Take the Fisher Space Pen by US-based Fisher Space Pen Company. The pen, invented in the 1960s, uses a pressurised ink cartridge and can write in space, underwater, and in temperatures ranging from -45 to 205 degrees Celsius. US space agency Nasa bought them in 1967 for its Apollo astronauts who have used it on the moon. Legend has it that the then Soviet Union bought 100 pens (and 1,000 refills) for use on the Soyuz spacecraft.

Or take the MARS Space pen, which has enough ink in one cartridge to write for 30 miles; by some estimates, that is enough to write for 80 years. You'll never need to buy ink or a refill ever again. Both these pens are priced in the neighbourhood of Rs 10,000.

Was the chain of stores — it is completely Indian — called William Penn for novelty value, too? Penn was an English real estate entrepreneur before he founded the US state of Pennsylvania with no connection whatsoever to India.

Ranjan laughs. "We thought an international name would give it more visibility and recognitions. Besides, there is a ‘pen' in the name." He says the chain is making operating profits.

Shyamkumar is contemplating his next purchase: Sailor Naginata Togi, named after the sword of the samurai in ancient Japan. The tip of its nib is shaped like a sword and made of 21-carat gold. The price: Rs 20,000. But then, the pen is mightier than the sword.