Getting The Mix Right 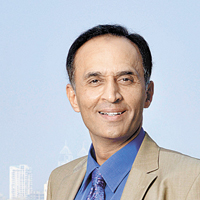 08 November, 2014
Print this article Font size -16+
In the early hours of the morning on November 11, co-chief executive officer (CEO) of Deutsche Bank AG Anshu Jain caught a flight back to Frankfurt after a two-day visit to the Mumbai office. The previous week, Josef Ackermann, the other co-CEO, was also in Mumbai. Company folks say that five of the bank’s biggest markets are in Asia, so it is no surprise how seriously the top management in the German bank takes India.

This is not the first time that Deutsche Bank has featured in the Businessworld Best Banks Survey; in the 2009 edition of the award, the bank won the best bank award in the small banks category, following that win up with this year’s fastest growing small bank. “We have increased both the number of clients we service, and the exposure to each of them,” says Ravneet Gill, managing director and CEO, India, at Deutsche Bank.

Just about five years ago, Deutsche Bank’s business was largely structural: structured finance, foreign exchange products and derivatives. But now, according to Gill, the bank’s business includes a mix of flow (which includes credit, cash management, treasury,  and so on) and structure that is sustainable, stable and depends upon deepening relationships with the clients.

What about retail, which is everybody’s holy grail? “We have been building the retail business over the past four years,” says Gill. “This year, we will turn a small profit, but no doubt, Deutsche Bank at the global level will be a universal bank.” Most of the bank’s clients are large Indian corporations and multinational firms.

Retail banking currently accounts for about 10 per cent of the business with the corporate banking and securities business accounting for the rest. However, retail also needs distribution, and that entails a lot more than the 17 branches that Deutsche Bank currently has. “We will be hoping to double our branch network in the coming three-four years,” says Gill.

Fair enough. But there may be other challenges that the bank — like any other foreign bank — may have to deal with, particularly on priority sector lending; recent draft guidelines proposed by the Reserve Bank of India incorporate some specific direct lending targets for agriculture and rural businesses.

“Yes, that is a big challenge,” Gill is quick to acknowledge. As long as his branch network is below 20, the guidelines are unlikely to have a big impact on strategy. Gill and his team, along with others, are looking at how to tackle the many issues involved.

So what’s the bank’s strategy for expanding in India? “We believe there are a lot of market discontinuities,” Gill says. “That means there are huge opportunities.” For Gill — and Deutsche Bank — it is a supply side issue for banking services in India; there is always scope for more. In other words, necessity is the mother of his bank’s ambitions.

Gill says Deutsche Bank is in the middle of a massive investment. Growth — and the promise of it — will be the driver of the bank’s ambitions in India: to be the dominant universal bank.